Italian industrial output fell in June. This latest result marks a weak trend which has been in evidence since the strong performance at the end of last year, as can be seen in the graph below. 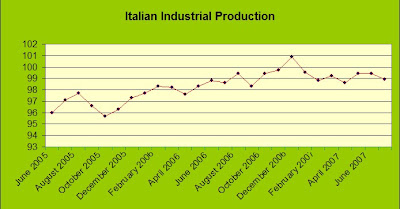 ``The numbers are surprising because the decline is not linked to just one sector,'' said Antonio Cesarano, an economist at MPS Finance BM in Siena, Italy. ``The extension of the slide to consumer goods and capital goods may mean that we're seeing the first effects of the strong euro, which could become a dominant issue in coming months.''

Growth in Europe's fourth-biggest economy has lagged behind that of the euro-region partners for the last 11 years. The expansion slowed in the first quarter and the stronger euro and higher energy costs contributed to pushing business confidence to a 17-month low in July.
Posted by Edward Hugh at 2:31 PM No comments:
Newer Posts Older Posts Home
Subscribe to: Posts (Atom)