We still of course are without detailed information on Italy's fourth quarter GDP performance (that is we really don't know whether or not Italy has entereda recession) but we do know that those who may well have seen some summary of the details are busily revising down there 2008 growth forecasts. The latest to join this list is the Italian Government itself, who today cut their 2008 economic growth forecast by more than half.

The Italian economy, which is still Europe's fourth-biggest, will grow at a rate of only 0.6 percent this year Finance Ministry said today in a prepared statement. That's down from a forecast of 1.5 percent in December.

The makes the Italian government even more pessimistic about Italy's coming growth performance than the European Commission or Confindustria (Italy's largest employers' organisation, who last month cut their 2008 forecast to 0.7 percent, a prediction which was later matched by the European Commission. (Update Thursday, Confindustria have now cut their 2008 forecast to "near zero", see below).


After lagging the EU average for more than a decade, Italy looks like it may well have the slowest-growing economy in the region this year, although we need to see what the final numbers turn out to be in some other weakening economies like Ireland, Spain, Greece or Portugal before we rush to too many conclusions here.

Most importantly this weak growth is likely to put increasing pressure on Italy's budget deficit, which the Finance Ministry now predict will rise to 2.4 percent of GDP in 2008, more than the 2.2 percent originally predicted but still under the European Union ceiling of 3 percent, if the target is achieved. The shortfall narrowed last year to 1.9 percent of gross domestic product, the least since 2000, according to ISTAT on Feb. 29. That's about half the 2006 deficit of 3.4 percent.

At the present time Italy's finance minister Tommaso Padoa-Schioppa (who is of course leaving office soon) was in lyric mood yesterday citing the Stoic Philosopher Seneca to the effect that "No wind is favourable for he who does not know where he is going". Well quite. But even if we don't exactly know at this point where Italy's deficit is going, we can be pretty sure that it is to no good place.

Tax evasion was the theme in the report Padoa-Schioppa's was presenting, and he highlighted the fact that the finance ministry has recouped more than €20bn ($31bn, £15bn) in less than two years. There was a scarcely veiled warning here towards Berlusconi's centre-right alliance, who have consistently denounced the "bulldog tactics" of the tax enforcers and which passed numerous tax amnesties when in office from 2001 to 2006. However Padoa-Schioppa noted that in spite of the decline in the deficit, interest payments alone now equated to €1,300 for every Italian every year, and of course, if the bond yield spread rises this figure could easily move upwards.


As I already noted in a post last week, the heightened risk aversion which is likely to prevail in global credit markets during 2008 has already sent the yield differential on Italian government bonds soaring, and this situation can not only be repeated but indeed get worse. And then there are the ratings agencies to think about. The problem here is that if you cry wolf often enough one of these days you really are going to get caught short, and Italian finances are now running dangerously near to that limit were a small problem turns into a serious issue.

Adding to the problems this time round is the fact that growth is steadily grinding to a halt at a time when the inflation rate is at an 11-year high of 3.1 percent. This situation of effective "stagflation" makes it very hard for the ECB to bring any meaningful relief on the interst rate front (which would also serve to loosen the euro-dollar) without bringing its credibility into question. 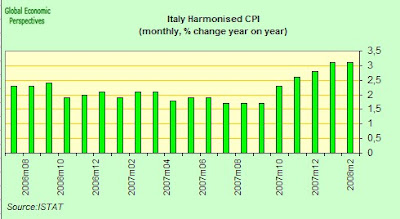 And to top it all, of course, we have the collapse of Prime Minister Romano Prodi's government on Jan. 24 after only 20 months in power. The uncertainty which this produces also helps muddy the economic water even more than it would otherwise be. Both leading candidates in the election campaign, two- time premier Silvio Berlusconi and former Rome Mayor Walter Veltroni, are promising tax cuts to help revive growth, but it is hard to see where the money for any of these tax cuts can come from when the country is going to find it hard enough to keep the deficit itself from rising even with the status quo being preserved.

Due to the increase of oil prices and the current level of exchange rates, Italy seriously risks zero growth in 2008, reported the Research Centre of Confindustria (CSC) in a spot investigation. According to CSC, the increase of oil prices takes away 0.6 points from GDP, the re-evaluation of the exchange rate takes away 0.2 (and further 0.4 in 2009).

'This slowdown affects all industrial countries, but it is more serious in a country with low growth like Italy' said this monthly analysis. Inflation remains moderate in spite of new strong price increases of raw material, and will remain so without inflationary tendencies caused by the labour market.

The difference in growth between Italy and the rest of EU therefore increased again in 2007 and remains higher than one percentage point in 2008. The slowdown of the Italian economy is stronger than in Germany and France. From 2000 until today the lack of growth in the country, in comparison to the other countries in the Euro-zone, has been of 10.4 pct, with an yearly average of 1 pct. This goes together with to a lower development rate accumulated since 1992. If Italy had had a 'European' growth, it would have in 2008 a GDP with extra 225 billion. The reasons of this slowdown has common reasons: loss of purchase power due to the price increase of raw materials (especially in the energy field), loss of competitiveness due to exchange rate re-evaluation, weakness of US economy. Italy struggles more than other countries due to delays in providing the necessary reforms in order to conform to the rules of the single currency.

Posted by Edward Hugh at 7:28 PM No comments:

It seems Italian industry is experiencing a slight recovery, since Italian industrial production in January rose the most in more than a year, led by demand for consumer goods such as clothing and food. Output was up 1.3 percent on Deecmber 2007, the most since December 2006 and the first increase in five months,and rose a workday-adjusted 0.5 percent from January 2007. 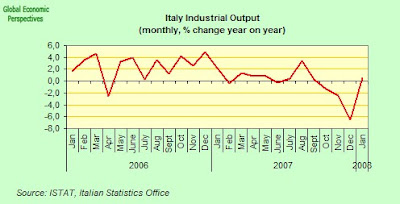 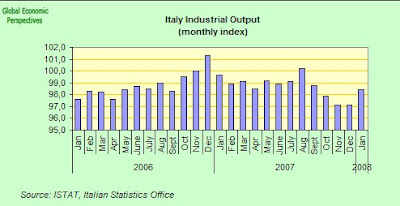 The latest manufacturing data from Europe - including the PMI data I posted yesterday - point to economic growth in the 15-nation euro region holding up in January and February - even as record oil prices and the euro's strength have damped the outlook. Italy and Spain are struggling more than France and Germany. Consumer optimism and business confidence are at the lowest in two years in Italy and the economy is set to expand less than the European Union average for a 13th year in 2008.
Manufacturing also picked up in France and Germany, Italy's biggest trading partners. Production in Germany, Europe's largest economy, jumped 1.8 percent in January while French output increased 0.5 percent, separate reports showed.
Posted by Edward Hugh at 3:13 PM No comments:

The February reading on the RBS/NTC Eurozone Manufacturing PMI - Purchasing Managers' Index - (a composite indicator designed to provide a single-figure summary of business conditions across the eurozone) registered 52.3 . The PMI was in line with the earlier flash reading and down from 52.8 in January, signalling a slight weakening in the rate of expansion to the second weakest level registered in the past two-and-a-half years. PMI readings among the big-four euro nations showed the widest variation for seven-and-a-half years, with continued solid growth in Germany and, to a lesser extent, France contrasting with near-stagnation in Italy and an accelerating rate of contraction in Spain. The PMI for Italy hit a two-and-a-half year low while Spain saw the sharpest rate of contraction since December 2001.

Italian manufacturing growth slowed in February, as orders fell for the second month running and exports stagnated, and the NTC/ADACI Index came in at 50.6, down from January's 50.8. 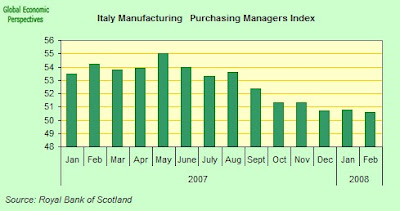 Export orders -- which had been relatively buoyant and offsetting low domestic demand -- stagnated for the first time since May 2005, reflecting the effect of a strong euro and reduced demand for Italian consumer goods in foreign markets. In February the overall new orders sub-index remained at 49.4 and output growth slowed to 51.3 from 51.8, with output of consumer goods contracting. The survey also had evidence that manufacturers themselves were preparing for a sustained slowdown. The employment sub-index fell into negative territory (49.2) for the first time since last September, indicating companies were tightening their belts. Business confidence hit a 28-month low in February, according to economic think tank ISAE, with consumer goods makers particularly gloomy amid falling orders.

Italy's service sector contracted in February at its fastest pace for more than a decade, as new orders languished and outstanding business fell away sharply, according to NTC/ADACI Services PMI. The 47.2 reading was well below the 50 mark separating expansion from contraction, and marked the third consecutive month of declining activity and the worst reading in the survey's 10-year history.

"A record fall in business activity was underpinned by a lack of new orders, reflective of low levels of demand," according to the NTC report. Fewer new orders meant backlogs of work were cleared for the seventh consecutive month in growing evidence of spare capacity in the sector. 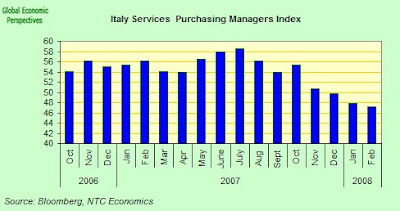