Italian retail sales declined in September for the 19th consecutive month according to the latest report based on the Bloomberg retail sales purchasing managers index. The seasonally adjusted index of retail sales fell to 42.8 from 44.8 in August. Any reading below 50 signals contraction.

Italian household spending will shrink for the first time since 1993 this year, according to the Confindustria employers association. Europe's fourth-biggest economy contracted 0.3 percent in the second quarter and may follow Ireland to become the second country in the 15-nation euro bloc to slip into recession this year. 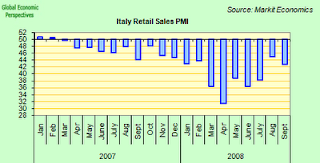 Forty-three percent of the Italian retailers surveyed said they missed their September sales target, and profit margins tightened as merchants sought to lure customers with discounts. Almost 37 percent said that margins had shrunk.

Declining sales prompted Italian retailers to cut staff for a ninth month, the report said. Italy's unemployment rate rose to 6.8 percent in the second quarter, the highest in two years, a separate report out this week showed.

The drop in Italian sales contributed to a decline at the European level. That index fell to 46.2 from 47.7. In Germany, the gauge rose to 44.6 from 44.1. Both remained below the 50 percent threshold that points to expanding sales. The only increase was in France, where the index indicated an expansion, though at a slower pace than the previous month.
Posted by Edward Hugh at 9:03 PM 2 comments:
Newer Posts Older Posts Home
Subscribe to: Posts (Atom)