Well, for the first time in six months we do have some real GDP data to look at, even if it doesn't make particularly attractive reading. If we start with the quater on quarter growth rates, we find that in Q4 2007 Italy's economy contracted by 0.4% vis-a-vis the Q3 2007 level, while Q1 2008 GDP was up by 0.4% on Q4 2007. Now the more astute among you might like to note that since the 0.4% contraction in Q4 was on a larger base than the 0.4% expansion in Q1, in fact the net result is that the Italian economy actually grew smaller in the six months between Q3 2007 and Q1 2008 -declining in chain-weighted contant prices from 321.83 billion euro to 321.77 billion euro. I don't know if anyone wants to call this overall contraction a "technical recession", but it certainly isn't evidence for an economy in good shape, and the sad part is that there is obviously worse to come. 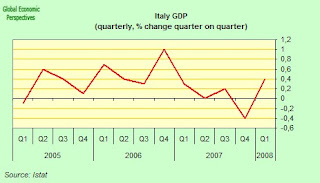 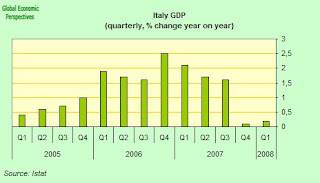 Whichever way you look at it the Italian economy has been virtually stationary over the last 12 months, and it looks like this situation may be repeated in the coming 12months. Unfortunately the Italian statistics office didn't provide a breakdown of the GDP figure in the preliminary estimate for the first-quarter and Istat will release its final report on Q1 Italian GDP on June 10, so we still have to wait a bit to find out what was responsible for the bounce back. However, what we do know is that in the fourth quarter Italian consumer spending fell 0.2 percent over the previous quarter. 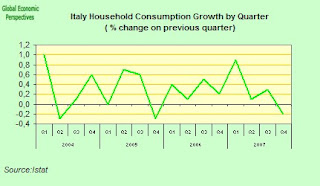 Both imports and exports contracted in Q4 2007 when compared with the previous quarter, imports by 1% and exports by 1.3%. 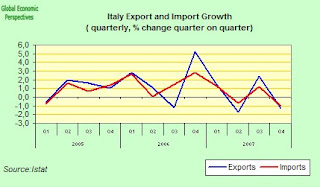 As a result of the deterioration in exports, the trade deficit also got slightly worse and this was obviously a factor in the negative growth performance registered in the quarter, from 1.165 billion euros in Q3 to 1.443 billion euro in Q4. 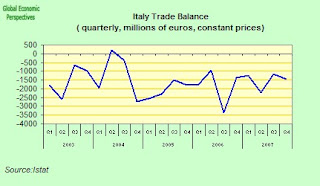 Also, if we come to think about productivity, we might like to remember that Italy was actually creating employment during 2007, and that employment was up year on year by 1.3% in Q4, while GDP was only up by 0.1%, so on a rule of thumb calculation basis you could come to the conclusion that labour productivity actually declined during the year. Certainly there is no reason to imagine there was any significant improvement, and this is very bad news indeed.

Italy's problem is not just one of this quarter or this year. As can be seen from the chart below it is very long term. The big question is now what happens to the fiscal deficit this year, and what the credit ratings agencies are going to have to say about the situation.

Italian consumer confidence bounced back somewhat in May, rising to its highest level so far this year. The announcement was made the day after Prime Minister Silvio Berlusconi formed a new government and announced tax cuts and relief for homeowners facing higher mortgage payments.

The Rome-based Isae Institute's consumer confidence index, calculated from a survey of 2,000 families, rose to 103.2 from a revised 99.9 in April. The increase was the second monthly gain since the index fell to a four-year low in March, but the reading is still well down even on the level being registered in the second half of last year.

Consumer optimism about their short-term prospects surged to 101.7 from 95.6, while confidence about the economic situation rose to 84.9 from 79.6, Isae said today in its report. The change of governement and the fiscal promises seem to be providing some sort of ashort-term boost, but the scenario in the medium run still remains pretty bleak.

The first legislative act of the new government yesterday was to scrap the country's main residential property tax and reduce levies that workers are charged on overtime pay. The government also announced an agreement with banks to allow homeowners to freeze mortgage payments at 2006 rates, a measure that could affect 1.25 million families. More than 70 percent of Italians back the measures, a survey by polling company IPR Marketing showed today.

Eighty-seven percent of Italians support the removal of ICI, a tax property tax homeowners pay to local authorities, IPR said. The pollster surveyed 1,000 Italians yesterday, after Berlusconi held his first policy making cabinet meeting and confirmed the abolition of the tax. No margin of error was given.

Confindustria President Emma Marcegaglia also expressed support for the government's initial measures during a speech in Rome thi morning. Referring to the tax cut, Marcegaglia said she was ``satisfied with this first step'' and emphasised that Confindustria would "collaborate'' with the government on measures to improve the country's competitiveness.

The agreement between the government and the Italian banking Association on mortgages will allow homeowners with variable-rate loans to lock in monthly payments at levels they were paying before interest rates began rising. The European Central Bank has doubled its benchmark rate to 4 percent since Dec. 2006, pushing up the cost to homeowners with variable-rate mortgages.

Italians who take advantage of the new measure will make payments at the 2006 levels for the duration of the loan. At maturity, if rates have risen or held at the post-2006 levels, the loan will be extended to allow banks to recover what they would have earned without renegotiation.

The big question, however, is not so much the cuts themselves, as how they are to be paid for. With the credit ratings agencies and the EU Commission now breathing down there necks the Italian government have, at this point, very little margin of manouevre, and cuts here must be counterbalanced by increases there or spending cuts elsewhere, and especially as income will slow as a result of the stagnant economy.

The tax cuts will be worth about 4 billion euros ($6.3 billion), Finance Minister Giulio Tremonti said yesterday. Tremonti also said the cuts will be fully financed and won't increase Europe's largest debt. The government will cut public spending to pay for the tax cuts, Tremonti said. He added that the government has already identified 2.6 billion euros in spending cuts to help finance the tax package. Further measures would be adopted in June to produce more financing to cover the lost revenue.

Looking out into the medium term though, Finance minister Giulio Tremonti said that Italy's economy will most probably stall this year and that there are no "easy fixes". With the continuing rise in energy and food prices Italians remain on tight budgets and according to the purchasing managers index Italian retail sales have been falling for the past 14 months.

The present government's outlook is even gloomier than the European Commission's forecast of 0.5 percent growth, which may make Italy the slowest-growing economy in the euro region in 2008 (we still have to see how rapidly the Spanish economy actually slows this year). The Italian economy may well have already slipped into recession either in the first quarter of this year or in the last quarter of 2007, and has suffered three recessions between 2001 and 2005. In any event we should not be living in the expectation of any rapid "bounce-back" here.

However the long wait on the GDP data front should come to an end tomorrow, since the national statistics office, Istat, will release growth figures for the fourth quarter and first quarter of 2008 at 11 a.m. Rome time.