Italian industrial production increased in April, with output rising 0.7 percent on a seasonally and calendar adjusted basis from March, following a 0.1 percent decline in March itself, according to data from the national statistics office in Rome today. Exports rose a surprisingly strong 1.4 percent in the first quarter (according to detailed data also released from ISTAT, full post to follow), and this was the principal driver of the revised 0.5 percent economic growth over the previous quarter. 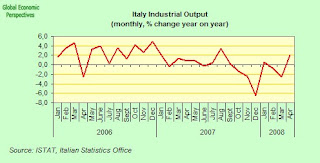 Production of consumer goods rose 3 percent in April from the previous month and the output of durable goods like refrigerators gained 2.7 percent, according to today's data. Non-durable goods increased 2.9 percent, while output of clothing and textiles rose 2 percent. Food and beverages production surged 3.7 percent.

However if we look at the seasonally adjusted output index (see below) it is clear that production is now well down on the December 2006 peak, even if we can see a slight rebound of the lows which were registered in November and December 2007. 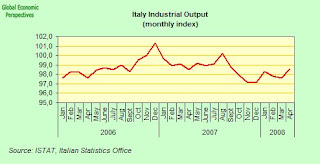