As Prices Fall In November, Is There A Deflation Risk In Italy?

Italy’s inflation rate fell to its lowest level in 11 months according to the ISTAT initial estimate out today, as energy costs fall and the economic recession makes it harder for producers and retailers to raise prices. Consumer prices calculated on the basis of the European Union harmonised methodology rose 2.8 percent from a year earlier, down from the 3.6 percent registered in October. 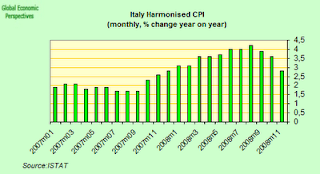 So the rate of disinflation is very rapid - but what about outright deflation, or an actual sustained fall in prices. Is there a risk of this in Italy? Well at the present time it is very hard to say, but month on month prices fell 0.4 percent in November, and the index is thus still at the same level it was in June (see chart below). That is Italian prices have been stationary since June. This is largely due to the negative energy prices shock, but with the sharp contraction in both internal and external demand now facing the Italian economy outright deflation certainly cannot be ruled out at this point. 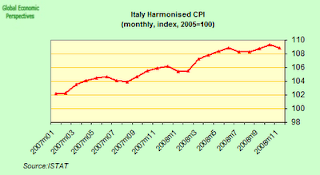 Italian retail sales fell at the fastest pace since records began (at least four years) in November as the economy slipped deeper into a recession, and consumer confidence and spending consequently deteriorated. The seasonally adjusted retail purcahsing managers index fell to 28.5 from 34.8 in October, registering the sharpest rate of contraction since the survey began in 2004, according to the Markit Economics monthly report. A reading below 50 signals contraction. 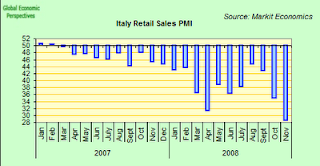 Non price corrected retail sales rose 0.5% year-on-year in September (the latest month for which ISTAT has published data) following a 1.3% fall in August. But we need to remember that once we allow for price inflation, we get a constant price real drop of 3.4% (inflation was running at 3.9% in September, see chart below for the time series). Retail sales of food products increased 1.4% in the month, although this impact was partly offset by a 0.1% fall in retail sales of non-food goods. Month-on-month, seasonally adjusted Italian retail sales (non price corrected) were up 0.3% in September, following a 0.5% decline in the previous month. 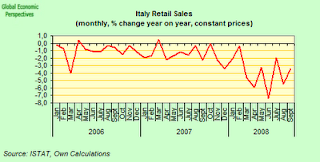 “Recession news may have dented household morale more than the market turmoil,” said Marco Valli, an economist at UniCredit SpA in Milan. “In the next few months darkening savings and labor market prospects should add to the gloomy outlook.”

Italy entered its worst recession since 1992 in the third quarter of 2008. The Italian government is scheduled to present an 80 billion-euro ($101 billion) stimulus plan on November 28, and the government also plans to increase the funding for temporary unemployment benefits as joblessness rises. However with approximately 103% of GDP outstanding in debt and a substantial bank bailout to finance, possibilities for additional counter cyclical spending are limited.

According to the newspaper l'Unita at least 400,000 Italian workers with temporary contracts may lose their jobs by the end of the year, citing data coming from a study carried out by the country’s biggest trade union, CGIL. The union forecasts that almost one in four of the 1.8 million part-time workers in Italy’s private sector will not have their contracts renewed at the end of December.

And the outlook next year seems to be even bleaker. The recession is almost universally expected to deepen ,and the International Monetary Fund forecast earlier this month that Italy’s economy will contract 0.2 percent this year and 0.6 percent in 2009. The IMF itself, in their latest Article IV Consultation Report - published on 20 November - described the outlook for the Italian economy as “bleak.”

“Beyond the present cyclical slowdown, the real economic crisis confronting Italy is the decline in productivity over the last decade, which has spawned stagnating incomes, rising unit labor costs and tepid growth,” the IMF said.

Obviously Italian consumers are getting some relief from the sharp drop in oil prices which means that gasoline and heating costs are falling as is the inflation rate, which has been falling steadily back from a six-year high of 4.1 percent in August. Thus the level of the consumer confidence index is still somewhat above the very low level we saw back in June. But having consumer confidence lying around just above all-time lows is hardly much consolation at this point I think.

The IMF expect Italy's fiscal deficit to widen in 2008. According to the fund the structural fiscal balance improved substantially in 2006-07, but this was mainly due to exceptionally strong revenues - and the overall deficit narrowed to 1.6 percent of GDP in 2007. But, with the 2008 budget anticipating a continued expansion and revenue waning as the recession started to bite, the overall deficit is expected to be close to 2½ percent of GDP this year.

The Italian government three-year fiscal package had targeted a broadly-balanced budget by 2011 - in line with Italy's undertakings under the EU Stability and Growth Pact. The adjustment plan was expenditure-based and targeted a structural consolidation of 0.8 percent of GDP in 2009, increasing thereafter, with the respective public debt and spending ratios falling accordingly. As the fund notes these plans were based on GDP growth rates of 0.5 percent in 2009 rising to 1.2 percent in 2011.

Since these forecasts are now rather outdated the near-term fiscal outlook is expected to deteriorate in line with the present macroeconomic environment. The IMF project a higher fiscal deficit in 2009 due to the weaker growth outlook, with the expenditure ratio rising further, even if the nominal spending limits continue to be observed. In addition, they note the danger that tax elasticities shift adversely during the downturn and expenditure savings are not fully realized. In this case the debt ratio will almost certainly rise further, reflecting the gap between the still-high average interest rate on government debt and falling growth rates, higher deficits, and possible bank support operations. All in all, it will be interesting to see how the credit ratings agencies react to this turn in events.