The Bank of Italy on Tuesday slashed its forecast for 2008 gross domestic product, citing a worsening global outlook dominated by the US subprime crisis and rising raw material costs. In cutting its growth projection for the country to 1.0 per cent from 1.7 per cent, the central bank’s latest quarterly bulletin also warned of the degree of uncertainty which characterised the current climate and of the danger of a more serious slowdown in Italy and other developed economies.

GDP is expected to have grown around 1.8 per cent in 2007 and the government is currently preparing to cut its own growth forecast for this year in line with the Bank of Italy’s projection. Italy began to feel the full impact of the global slowdown late in the fourth quarter of 2007, the Bank of Italy said, warning of a ”concrete risk that credit conditions for firms and families may undergo a significant tightening”.

Back on the 6 January 2008 I put up a post here which included a forecast for 2008. In that forecast I included the following, which really does not look so "out of consensus" now that the Bank of Italy have made their substantial write-down:

As most of the forecasts suggest, we have been seeing growth which is somewhat above trend during the upswing in the last couple of years, so it would not be surprising if we now saw some below trend growth. Trend growth (over a 5 year average) in Italy may even have fallen into the 0.5 to 1% range, so if I have to put a number I would say 0.7% with a definite "downside risk" tag attached. The nearest forecast to this that I have seen is the 1% one from the Morgan Stanley GEF team. The implications of such sustained low growth are, I think, important, since if Italy cannot find the way to raise trend growth up towards the 2% mark there is simply no way the government debt can be stabilised and sustained. And with each passing year we have one year less to crunch time

Really we now need to see the data for GDP in the 4th quarter of 2007. The readout will undoubtedly be very low, and it could be that quarter-on-quarter growth was either flat or even slightly negative, in which case we may already have entered recession at the turn of the year. Just keep watching for those downward revisions, and look out for the impact on the fiscal situation.
Posted by Edward Hugh at 5:41 PM No comments:

Italian industrial production fell for a third month in November, adding to signs that growth in Europe's fourth-biggest economy is slowing. Production fell 0.9 percent from the previous month, when it dropped a revised 0.6 percent, the Rome-based national statistics institute, or Istat, said today. Economists expected an increase of 0.3 percent, according to the median of 25 forecasts in a survey by Bloomberg News.

``Everything is now pointing to a downturn,'' Maurizio Binelli, a senior economist at Abaxbank SpA.

The economic outlook for Italy's economy is getting bleaker and bleaker at the moment as weak domestic demand and the impact of a stronger euro on exports put the ecoonomy in a pincer vice. The euro's 15 percent gain against the dollar in the past year is adding to Italy's competitiveness problems as oil prices at around $100 a barrel pushes up energy bills, raising production costs and leaving families with less money to spend. 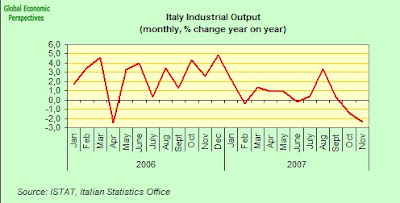 Production of consumer goods declined 0.3 percent from October, led by a 2.7 percent drop in the output of durable goods like refrigerators and washing machines. Output of non- durable goods gained 0.2 percent.

Italian business confidence declined to a two-year low in December, while a sub-index measuring manufacturers' expectations for production in the next three months fell to 11, the lowest since July 2005, according to the Rome-based ISAE report.

At this point - with declining retail sales, falling industrial production, credit crunch restricted construction issues and a weakening export outlook, it is hard to see where growth in going to come from in Q4, so I will simply reiterate what I said in my January forceast for 2008:

The OECD in December revised their 2007 Italian forecast down to 1.8%, and the 2008 one down to 1.3%. Confindustria also revised their forecast down in December, arguing that growth would slow to 1 percent in 2008 from an 1.8 percent this year, citing factors like the rising cost of food and oil and the rise of the euro against the dollar. Such numbers are clearly not encouraging, but arguably downside risk for 2008 is greater even than either the OECD or the Confindustria forecasts reflect Morgan Stanley's Vladimir Pillona is somewhat more sanguine. While presenting the MS central forceast for Italian economic growth to slow to 1.0%Y in 2008, from 1.8%Y in 2007, he goes on to note that "even annual GDP growth of 0.5%Y next year has a significant possibility of occurring, as shown by our model’s forecast error bands".


I personally will be very surprised if we still see calendar year 2007 anything like as high as 1.8%, but more to the point even 1.3% may be rather on the high side if we get a significant deterioration in the external environment, especially in Eastern Europe on which Italy is fairly dependent, and where the Italian banking sector has significant exposure. So that puts me much nearer to Pillona's "basement bargain" number of 0.5% than to any of the others. One of the reasons for my pessimism relates to my assessment of Italy's current trend growth rate, and to the level of fiscal and monetary tightening which may be operating on the economy even as it slows. During 2007 the Italian govenment has been running a fiscal deficit of comfortably below the 3% of GDP required by the EU commission. But since this fortunate situation was in part acheieved by the use of one off measures, and in part by the strong tax inflow from the above trend growth, the government will need to maintain a comparatively tight fiscal stance to keep things on course, and any attempt to further loosen may run into real problems with the EU commission and the credit rating agencies. And as I keep arguing, it is very hard to see an accomodative monetary posture from the ECB in the near future.