Industrial production in Italy fell for the eighth month in February as the nation’s worst recession in more than 30 years forced companies to cut output. Production in the euro region's third biggest economy dropped a seasonally adjusted 3.5 percent from January, when it fell a revised 1.2 percent. From a year earlier, working day adjusted production fell 21 percent. The monthly decline was more than the 1.5 percent median forecast of 18 economists surveyed by Bloomberg. 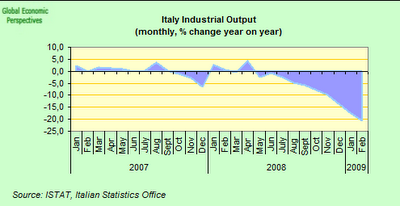 And the picture doesn't seem to have improved any in March, since manufacturing activity fell in Italy at its fastest pace on record, with the manufacturing purchasing managers index falling to a record low of 34.6, down from February's 35.0 and suggesting an unprecedented contraction in activity for the sector. Weakness was widespread, Markit said in their report. Staffing levels were cut at a record pace as firms were forced to adapt to falling workloads and declining new orders. Backlogs of work also declined at their sharpest pace in the history of the PMI as falling demand meant firms to were increasingly able to complete outstanding projects. 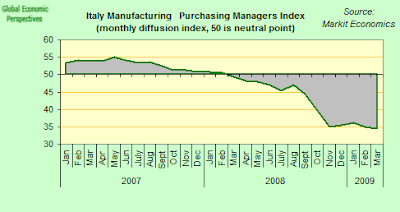 The Contraction In Italian Services Continues


Italian service sector activity also stayed close to record lows in March, with employment falling the fastest in over 11 years, according to the PMI survey released last Friday. The Markit/ADACI Purchasing Managers' Index, spanning companies from hotels to insurance brokers, edged up to 39.1 after hitting 37.9 in February, its lowest level since the survey began in January 1998.

The headline measure has not been above the 50 mark that separates growth from contraction since November 2007, and the survey showed jobs were shed in March at a record pace. The survey also showed that companies' input costs and the prices they charged customers were falling at the fastest rate since the series began as firms scrambled to offer discounts to attract business.

"Averaged over the quarter, service sector activity fell at the fastest pace since at least 1998," said Andrew Self, economist at Markit Economics. "The slump is in line with a year-on-year contraction of gross domestic product between 2.5 and 3.0 percent. This implies economic output will contract at a sharper pace in the first quarter, on a quarterly basis, than in the last quarter of 2008." 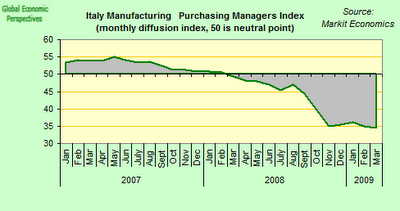 The Organisation for Economic Cooperation and Development forecast last week that Italy's GDP would plunge 4.3 percent this year and fall 0.4 percent in 2010, giving Italy three consecutive years of economic contraction. According to the OECD unemployment will jump to 9.2 percent after rising in 2008 for the first time in a decade to 6.8 percent.
Posted by Edward Hugh at 9:46 AM 5 comments:
Newer Posts Older Posts Home
Subscribe to: Posts (Atom)