Italian industrial production declined in October for a second month as the euro's gains against the dollar continued to put pressure on export competitiveness. Production fell 0.3 percent from September, and 1.5% year on year, according to the national statistics institute (Istat) today. 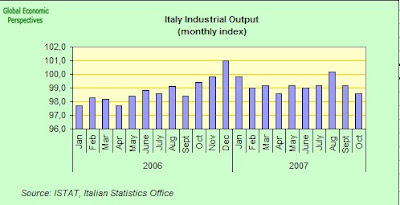 The economic outlook for what is Europe's fourth-biggest economy is dimming by the day, as imports continued to outpace exports in the third quarter and as the pace of consumer spending growth slackened in Q3 2007.

Italian production of consumer goods dropped 0.1 percent in October, according to the detailed breakdown of today's data. Manufacturing of non-durable goods such as clothing fell 0.1 percent. Durable goods, which include washing machines and refrigerators, declined 0.2 percent.
Posted by Edward Hugh at 5:35 PM No comments:
Newer Posts Older Posts Home
Subscribe to: Posts (Atom)