Here is the latest data on Italian retail sales from (June) ISTAT: 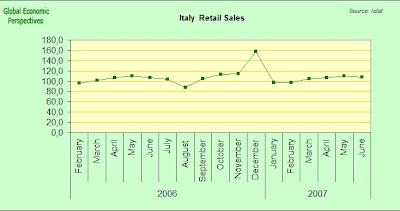 Or as Bloomberg put it:

Italy's economy, the fourth-biggest in Europe, grew at the slowest pace in 1 1/2 years in the second quarter as manufacturing output cooled. This month's rout in financial markets caused by the U.S. subprime crisis that raised the cost of loans has darkened growth prospects. The Italian economy is unlikely to expand at the 2 percent previously forecast, the government said this week.

Actually Bloomberg also collaborate with NTC economics to produce a monthly index based on a survey of more than 1,000 executives. This data is rather more up to date than that produced by ISTAT, but the picture offered is pretty similar, and August was the sixth month in a row that the index gave a reading below 50, a level which indicates contraction. 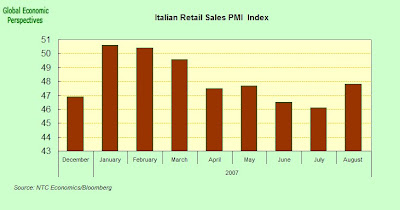 Again, as Bloomberg put it:

A seasonally adjusted index of retail sales was at 47.8 in August compared with 46.1 in July, according to a survey of 440 retail executives compiled for Bloomberg LP by NTC Economics Ltd. The reading has stayed below 50, the level that signals a contraction in sales, since February. Market turmoil aside, Italy is suffering on other fronts. Tourism, a key contributor to Italian retail sales in the hot summer months, has been ``weaker'' in August, typically a boom month for consumer spending, NTC panelists reported. Twenty-eight percent of retailers surveyed said they missed their sales targets this month, with only 16 percent reporting they beat their expectations. Looking ahead, 21 percent expect to beat their September targets.

Posted by Edward Hugh at 1:25 PM No comments:

Italian consumer confidence dropped to a 16-month low of 106.5, a separate report showed today. Household spending makes up for two-thirds of the $1.8 trillion economy and is the motor for growth in Italy, the laggard among the top four economies in Europe.

If we look at a graph of the time series we will see that this index peaked back in December, and has been steadily working its way down since, which isn't really surprising when you come to look at the general macro data for the Italian economy so far this year. 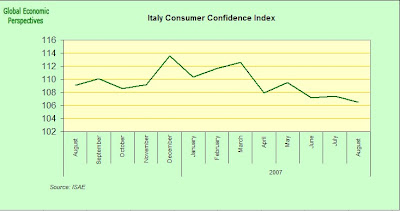 Posted by Edward Hugh at 1:13 PM No comments:

Italian Finance Minister Tommaso Padoa-Schioppa is being quoted in the press this morning as saying that ``The growth target of 2 percent for 2007 appears to be more ambitious that we thought two months ago,''.

He certainly has this one right. With growth in Q1 at just 0.3% and in Q2 at 0.1%, and the eurozone economy visibly slowing by the day, I would say it will be hard this year for Italian GDP to push through the 1% ceiling as an annual total. Basically I don't see combined growth in Q3 and Q4 as being greater than the combined total for Q1 and Q2. I explain some of my reasoning here.

This is why I normally don't agree with the kind of economists Bloomberg seems to consult, who seem to continually regard Italy's consistently sub-par growth readings as "unexpected". If you look at Italy's growth history over the last 15 years, think about the ageing population issue, and follow the short term economic data on consumer confidence, retail sales and industrial ouput, then the GDP readings being obtained shouldn't come as a shock, since they are empirically and theoretically entirely to be expected. As a consequence the annual growth rate for 2007 looks like being well down. To be talking about 2% growth at this stage is frankly ridiculous. As I say, in the current climate it is hard to imagine H2 2007 being better than H1. So I think someone somewhere had better get to work preparing the explanations for those good people from Standard and Poor's and Moody's.
Posted by Edward Hugh at 11:34 AM No comments:
Newer Posts Older Posts Home
Subscribe to: Posts (Atom)