The latest reading on the Bloomberg Eurozone Retail Purchasing Managers' Index (PMI) suggests that European retail sales rose in May at the fastest rate since April 2007, and registered the first increase for three months.

The Bloomberg Eurozone PMI, an indicator based on a mid-month survey of economic conditions in the euro area retail sector and providing data one month ahead of government issued figures, registered 53.1 in May, suggesting a significant bounce-back from April's survey low of 41.8. The improvement reflected higher sales of clothing & footwear, food & drink and household goods, commonly attributed to better weather compared to April and to the timing of Easter.


However, despite the pick-up during May, sales have fallen over the first five months of the year on average, suggesting that business conditions in the Eurozone retail sector are generally subdued. Also, due to the very early timing of easter this year, and some very untypical weather, it is hard to interpret the month on month readings. If we add the two readings - April and May - together, and halve the result, we get 47.45, which means on average there was contraction across both months.

In May sales rose in Germany and France but fell in Italy. In fact the data from Italy continue to make decidedly depressing reading since Italian retail sales fell for the fifteenth successive month. Although the rate of decline slowed from April's record pace (the index rose from 31.4 to 38.8), the last three months have seen the three sharpest falls in sales seen over the survey's four-and-a-half year history. Consumers remained reluctant to spend due to squeezed incomes and concerns over the economic and political environment. I think the chart below gives a quite exceptional image of the state of play in terms of domestic consumer demand in Italy. Horrible! 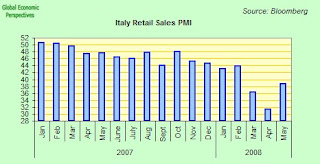 Posted by Edward Hugh at 9:50 PM No comments:

Italian business confidence rose for the first time in seven months in May after Silvio Berlusconi's victory in the April national election resolved political uncertaintly to some extent and manufacturers' orders improved, raising slightly the short term prospects for higher production. The Isae Institute's business confidence index rose to 89.6, the highest since February, from a revised 87.6 in April, the Rome-based research center said today. That was the biggest monthly increase in more than a year.

``Confidence is bouncing back a little, but it won't be sustainable,'' said Paolo Pizzoli, an economist at ING Bank NV in Milan. ``When Germany's economy slows, it's going to hurt Italy.''

German growth is helping to offset the effect of a strong euro and rising energy costs. Germany's Ifo survey also rose slightly to 103.5 in May from 102.4, according to a May 21 report.

``The data is in line with what recently emerged from the Ifo survey of German manufacturers,'' Isae said in a statement. ``Businessmen are more optimistic about demand, especially foreign demand, and the outlook for production.''

In terms of the sub indexes, the measure of total orders rose to minus 16 from minus 18 in April, and the three-month outlook for production rose to 14, the highest since November, from 9 in April. An index of foreign orders rose to minus 16 from minus 20.
Posted by Edward Hugh at 3:01 PM No comments:
Newer Posts Older Posts Home
Subscribe to: Posts (Atom)