Italian industrial production fell again in March for the second consecutive month. Output was down 0.2 percent from February, when it also fell by the same amount, the national statistics office said in Rome today. 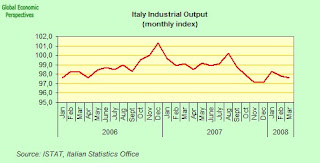 On a year on year and working day corrected basis (Easter was in March this year) output was down by 2.5%. Production of Italian consumer goods fell 0.7 percent from February and the output of durable goods like refrigerators declined 2.8 percent. Non-durable goods dropped 0.7 percent. The only gain came in energy related goods, which rose 2.3 percent. 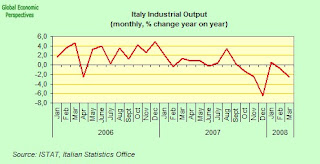 As forecast on this blog last month, a significant part of the decline in output was probably caused by the plunge in car production, which fell 9.2 percent from a year earlier on a non-adjusted basis. Istat did not give car output figures compared with the previous month.

Also, and for those of you who are interested in this kind of thing, the manufacturing PMI seems to be giving a reasonable good first pass forecast of what is actually happening, and the index showed strongish contraction again in April, so the agony seems set to continue, at least for the time being. 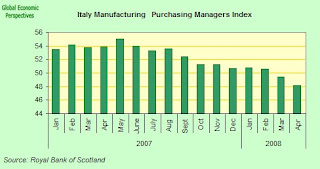 The IMF are forecasting that Italy's economy will expand by a mere 0.3 percent this year, or a fifth of last year's pace. We haven't see any recent GDP data yet, but looking at the data we do have this would seem to be a not unreasonable guesstimate at this point.
Posted by Edward Hugh at 7:20 PM 1 comment:
Newer Posts Older Posts Home
Subscribe to: Posts (Atom)