Economic growth in Italy slowed even further in the second quarter of 2007, according to provisional figures released on Friday by the National Statistics Institute ISTAT. In the April-June quarter gross domestic product increased by only 0.1 per cent, compared with the first quarter of 2007, when GDP grew by 0.3 per cent (see chart below). This is the slowest growth in the last 18 months. Projected growth for 2007 has so far declined from 2.3 per cent based on the first quarter, to only 1.8 per cent at present. This number, apart from being far below the current European Union average of 2.6%, now looks like it may well need further downward revision.

The projections are now also significantly below the estimated 2 per cent growth for 2007 which the government used as a basis for its economic and financial planning document in June. The blueprint envisaged cutting budget deficits, as well as a gradual reduction of the national debt from the current 107 per cent of GDP to 100 per cent of GDP by 2010. Less growth will inevitably result in a smaller increase in revenue, and run the risk of yet more problems with the debt rating agencies.

As the Financial Times says:

If this trend continues, it could create serious difficulties for the centre-left coalition led by Romano Prodi, the prime minister, for whom economic rigour, growth and a reduction of the huge national debt are primary goals.

In general the picture has been becoming reasonably clear from the industrial output numbers we have been seeing, the retail sales data, as well as the consumer confidence readings.

If we look at the chart below which shows year-on-year GDP growth rates by quarter, then it is really starting to look like this cycle may have peaked in the last quarter of 2007.

And if we look at the evolution of Italian GDP growth rates it is clear that the situation is not a new one, average growth rates for the Italian economy have been trending down for the last couple of decades, and it is a hopeless form of wishful thinking to imagine that things will change just like that. If the author of this blog is right this whole process is associated with the steading ageing of Italian society, and if it is then the issue will just not go away, and there will be some explaining to be done to the ratings agencies about just why it was thought to be convenient only two weeks ago, to slow down the implementation of the retirement age reform. 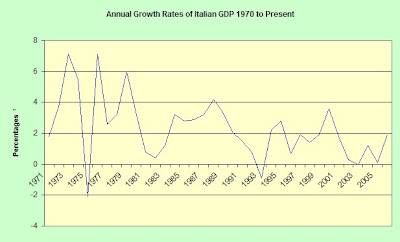