Eurozone Retail Sales Contract For the Tenth Month In Succession

The Bloomberg Euro-Zone Retail Purchasing Managers' Index - based on a mid-month survey of more than 1,000 executives in the euro area retail sector - rose marginally in March - to 44.1, up from 42.3 in February to 44.1 in March. This was the smallest monthly drop in the value of sales in five months, but it was still a drop, and quite a significant one, since the neutral point between contraction and expansion is 50. Still first quarter retail sales have seen an average monthly decline which is smaller than in the fourth quarter of last year (an effect of all those stimulus programmes), however sales have now fallen for ten consecutive months.

Retail sales in Germany, the zone's largest economy, dropped for a 10th month in March as unemployment rose and manufacturing industry continued to grapple with a slump in export orders. The retail PMI dropped to 44.4 from 45.4 in February.

German households are cutting spending as a deepening economic slump forces companies to eliminate jobs, pushing up unemployment. The fall comes despite the decision of German Chancellor Angela Merkel to spend about 82 billion euros in measures to stimulate growth, including tax breaks and incentives to buy new cars.

“Consumers were generally unwilling to spend, while evidence of shorter working hours at local companies reportedly curtailed their buying power,” Markit said in the statement. “The overall decline may have been greater were it not for government incentives to scrap old motor vehicles, which continued to support sales in the automobile sector.” 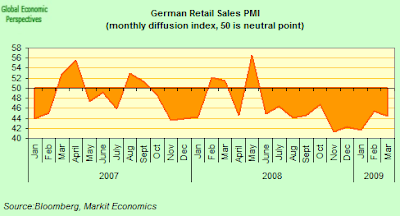 Italian retail sales contracted for a 25th month in March as the country's worst recession in more than 30 years prompts companies to cut jobs, in the process eating away at consumer demand. The index was up slightly at 41.9, from 38.2 in February.

Italy slipped into its fourth recession since 2001 last year, sending the unemployment rate to a two-year high. The government has adopted around 40 billion euros in stimulus measures, but is constrained from spending more due to the high level of prior government debt. As a result the OECD forecast the economy will likely contract by 4.2 percent this year. 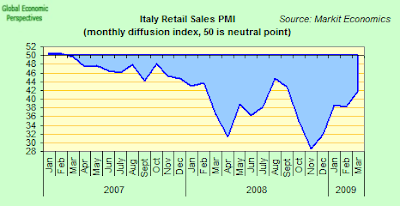 France also saw a moderation in the rate of sales decline, with the pace easing from February's record but remaining steep. Month-on-month the index rose from 42.6 to 45.7, rounding off a first quarter that has seen the weakest sales performance in the history of the French survey. French retailers have reported falling sales in five of the past six months. 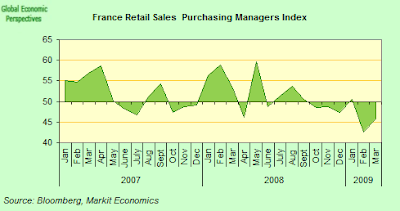