Italy's unemployment rate on a seasonally adjusted basis remained unchanged in the last quarter of 2007, bringing to an end a run of over three years when the rate has been declining, a we could read this as just one more sign that the economy is at stall speed as slowdown starts deterring companies from hiring. 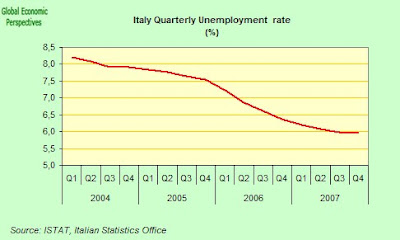 The unemployment rate held at 6 percent, and this was the first time had it failed to drop since the last quarter of 2004, the National Statistics office Istat said today. The average annual rate still, however, remains at its lowest level since 1993.

Joblessness among Italians between the ages of 15 and 24, which has been trending down slightly over the past two years, rose 0.6 percent in the fourth quarter from a year earlier. 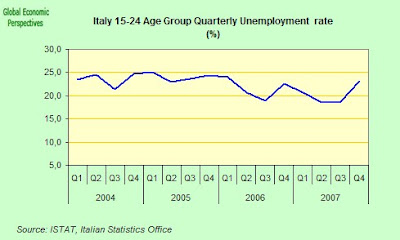 However these record-low unemployment rates in Italy mask significant regional disparities in joblessness. The jobless rate in Italy's industrial north was 3.4 percent in the fourth quarter, compared with almost 11 percent in the south of the country. The number of jobless Italians who have given up looking for work fell by 3.1 percent to 1.7 million from a year earlier.

Italian unemployment has declined steadily since 1999 after the introduction of changes which effectively made it easier for companies to hire part-time and temporary workers who don't enjoy the same benefits and job security as full-time staff and can be more easily fired when financial constraints force cuts. This ease of hiring and firing is reflected in the data, with workers with temporary contracts working full-time being down of the same quarter a year ago for the first time in at least three years. 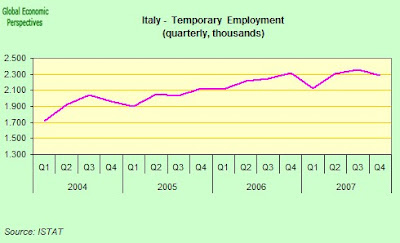 Part time working has also grown steadily since the reform, and nearly 1 in 4 jobs in Italy is now either part time or temporary. 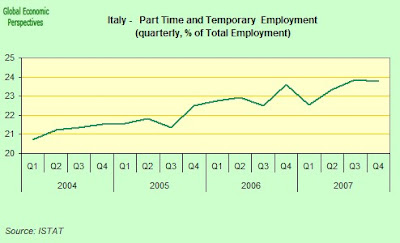 And growth in temporary and part time working has been especially pronounced among the over 35 age group. Unfortunately ISTAT don't provide detailed enough data here, but I think it would be reasonable enough to assume that a significant share of these workers are over 50. 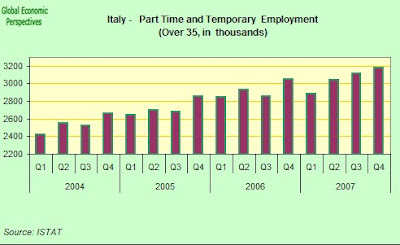 Moreover, after many years of very low fertility fewer and fewer Italians are now joining the workforce. Two- thirds of the annual increase of 308,000 new workers in the fourth quarter were immigrants, and the other third can be effectively accounted for by an increase in employment in the 55 to 64 age group. If you look at the chart below (which is slightly illegitimate - but only slightly so - since I have derived it by subtracting the number of foreign workers and the number of workers from 55 to 64 from total employment, and some - even if very few for their age profile - migrant workers are in the 55 to 64 age group) we can see that the number of under 55 year old Italians in the workforce has been virtually stationary during the last two years, years of comparatively strong economic growth (in Italian terms) and record low unemployment. I think it is very easy to see some sort of ageing population effect in all this. 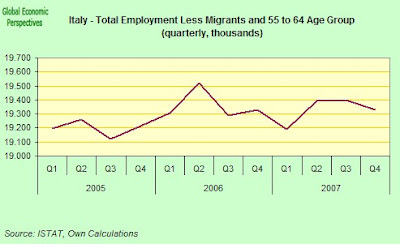 So, where does that leave us? Well with a not especially strong underlying labour market dynamic I would say, and that despite the evident progress that has been made in bringing down unemployment. And again, if you look at these numbers I think it isn't too hard to see some of the reasons which help to explain why Italy is suffering from rather weak consumption and low productivity growth.
Posted by Edward Hugh at 4:56 PM No comments:

Italy's economy will expand at the slowest pace in five years as "external shocks" such as record oil prices and the strong euro impact consumers and businesses, the Isae research institute said. Europe's fourth-biggest economy will grow by 0.5 percent this year, Rome-based Isae said. That's down from their October forecast of 1.4 percent and would be the weakest rate of growth since 2003.

Oil prices above $100 a barrel have driven euro-region inflation to 3.1 percent, the highest rate in 11 years, and saddled households with higher energy bills and left them with less money to spend. At the same time, exporters are struggling to sell overseas because the euro's 18 percent rise against the dollar in the past year make euro-denominated goods expensive in the U.S., Europe's biggest trading partner.

After lagging behind economic growth in most other EU countries for more than a decade, Italy is likely to be the slowest-growing economy in the region this year.

According to ISAE Italy's budget deficit is expected to rise to 2.7 percent of gross domestic product, more than the 2.6 percent formerly predicted, though still under the European Union ceiling of 3 percent. The deficit narrowed last year to 1.9 percent of gross domestic product, the lowest since 2000, the Rome-based national statistics office said Feb. 29. That's about half the 2006 deficit of 3.4 percent.
Posted by Edward Hugh at 4:07 PM No comments:
Newer Posts Older Posts Home
Subscribe to: Posts (Atom)