Italian business confidence fell to a record low in February as concern that the fourth recession in seven years will damp orders more than offset lower oil prices and borrowing costs. The Isae Institute’s business confidence index dropped to 63.2, the lowest since the index was created in 1986, from a revised 65.4 in January.

Italian executives also reported having more problems getting credit in February. The report showed that 40.2 percent of those surveyed said the credit situation worsened, up from 33.5 percent in January. The new orders sub component also fell, to minus 65 from minus 58 in January, the lowest since 1991. And manufacturers’ expectations for production over the next three months fell to minus 24 from minus 20.

Italian retail sales contracted for the 24th consecutive month in February as the credit crunch tightened its grip on spending, and consumers put off purchases of cars and home appliances. 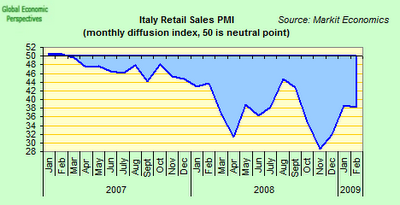 Italy's entered its fourth recession in seven years in the third quarter of 2008. The Italian government now forecasts the economy will contract 2 percent this year, the second consecutive year of contraction, and even this seems optimistic at this point. The government has announced an 80 billion-euro stimulus plan and 2 billion euros in incentives for the purchase of cars and home appliances., but in general the country is too indebted to be able to do anything very ambitious.

So Italy waits, in the hope that help may come from Brussels, where the 27 members of the EU will meet on Sunday - lead it seems by Angela Merkel - to decide what to do next.

And I hope you are "readying up" that rescue plan Angela, since the difference between German and Italian benchmark bond yields widened to the most in nearly 12 years today as Italy sold 10 billion euros ($12.8 billion) of government securities. 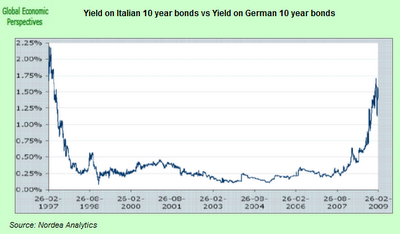 The spread between the 10-year note yields increased as much as four basis points to 161 basis points today, the widest since May 1997, based on generic Bloomberg prices. It was at 155 basis points as of 12:05 p.m. in London. The average in the past 10 years is 31 basis points.

Germany or the International Monetary Fund may be forced to rescue members of the euro bloc that struggle to refinance debt, former Bundesbank President Karl Otto Poehl said today.

“The first will certainly be a small country, so that can be managed by the bigger countries or the IMF,” he said in an interview with Sky News. “There are countries in Europe which are considering the possibility to leave the eurozone. But this is practically not possible. It would be very expensive.”

Posted by Edward Hugh at 4:44 PM No comments:

It isn't only the bank bailout programme which is suffering in Italy due to lack of sovereign borrowing capacity. (See here for the full background on Unicredit and EU Bonds). I couldn't help noticing this piece in Bloomberg earlier in the week.

Italian Labor Minister Maurizio Sacconi said the government can’t provide unlimited unemployment benefits, La Stampa reported. The government is concerned about unemployment and has freed up about 8 billion euros ($10.3 billion) in regional aid that local entities can tap into, Sacconi told La Stampa in an interview. Still, “we cannot leave the taps running,” Sacconi was also cited as saying.

So as the recession deepens, and layoffs spread, the Italian government is obviously going to have problems keeping people afloat. Which lead me to think, maybe there are two ways to do this, the regular, and the irregular one. And maybe Italy is the ideal place for the application of rather more "unconventional tools" in fighting the crisis, especially since money for the conventional ones is beginning to run scarce.
Read more »
Posted by Edward Hugh at 4:26 PM No comments:
Newer Posts Older Posts Home
Subscribe to: Posts (Atom)