At the present time the Achilles heel of the Italian economy has a name, and it is called Unicredit. In a number of posts on this blog (here, here, here, here) I have tried to draw attention to the potential problem the deteriorating balance sheet of what is now Italy's second bank by market capitalisation (after Intesa Sanpaolo) it used to be the first before the shares fell) and first bank by assets, and how this issue is exaccerbated by the fiscal embarassment of the Italian state. 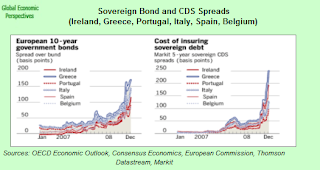 The spread between Italian and German 10-year bonds hovered around 1.36 percentage points on Monday, more than four times its average over the euro's first eight years. Continuing social unrest in Greece has also pushed the gap between the yield on that country's 10-year bond and that of its German counterpart to a fresh high of more than two percentage points (see much more on Greece here).

At the same time, the cost of buying insurance on Spanish, Italian and Greek debt has more than tripled over the past six months, according to credit information firm Markit Group. Even as the market turmoil has eased in recent weeks, the price of such insurance on Southern European debt has continued to increase, touching highs earlier this month. The widening spreads and increasing insurance costs show opinions among investors about the short term outloook now vary considerably between one eurozone country and another.

Such widening spreads mean more expensive bond auctions for the Italian government in the future, and this is just where the trouble comes, since Italy has a very hefty accumulated debt to continually refinance (around 105% of GDP), and it is partly because investors don't see clearly how a government with a damaged banking system and an economy which looks set to shrink for at least two years can continue shoulder the weight of this debt let alone increase it, especially given the evident difficulty faced by the Italian government in enforcing measures to reduce it, that the widening is occuring.


Unicredit shares fell in Milan trading this morning after the bank admitted 2008 earnings won’t meet their target. Unicredit shares were down as much as 4.7 percent - to 1.52 euros at one point - their lowest price since 5 December, and were trading at 1.55 euros (down 2.6 percent) in Milan, giving it a market value of 20.7 billion euros. UniCredit said in a statement late yesterday that it expects net income of 4 billion euros in 2008, excluding a property sale that will be smaller than planned. The company in October forecast net income of 5.2 billion euros.

UniCredit recently reached an agreement with unions to offer early retirement to 3,700 workers in an attempt to cut costs amid the global financial crisis, and last week they bank pulled out of an option they had to buy the Polish government's remaining 3.95 percent stake in Bank Pekao in order to not put more strain on the bank's solvency ratios.

Unicredit was downgraded to "neutral" from "buy" by analysts at Merrill Lynch this morning. The bank cited “the fast deteriorating macro picture in Italy and Central Eastern Europe”

“The high exposure to Central Eastern Europe and to the corporate business result in UniCredit above average sensitivity to the poor macro environment and to asset quality deterioration,” London-based analysts Antonio Guglielmi and Andrea Filtri wrote in a note to investors today.

Ukraine Clients May Default On 60% Of Loans

A 44 percent slide so far this year in the Ukraine currency, the hryvnia, is threatening the repayment of loans and mortgages denominated in foreign currencies. Roman Zhukovskyi, head of the social and economic department in President Viktor Yushchenko’s office, estimated in a televised press conference in Kiev on Wednesday that if the hryvnia traded near 9 per dollar, some 60 percent of loans may not be repaid.

“A substantially weaker hryvnia is going to seriously hurt corporations since Ukrainian companies have massive external liabilities,” said Ozgur Yasar Guyuldar, a senior emerging markets strategist in Vienna at Raiffeisen Centrobank AG, who forecast the decline to below 9 per dollar in November. “It is inevitable to see dozens of corporate bankruptcies.”

In an attempt to soften the devaluation blow and bolster the currency Ukraine’s central bank raised its refinancing rates for the second time in two days today to 22% after the hryvnia fell as much as 16 percent in the past two days. But this is likely to be of little avail given that the economy is already headed for an estimated 5% GDP contraction in 2009, and these kind of interest rates make any softening of the economic slump impossible.

Of course the meltdown which is taking place in the East at the moment does have its own special surreal dimension, since while Merrill Lynch analysts in Italy are busy pushing down Unicredit's share price, Unicredit analysts in Moscow are busy biting the hand (in Italy) that feeds them by downgrading the Russian property market, and with it the Russian property developers, whose defaults will, in their turn, drive Unicredit's share price in Italy down even further.

Russian property stocks slid in Moscow trading after UniCredit SpA said real-estate prices are so inflated they may need to be halved to lure buyers back to the housing market. OAO Sistema Hals, the developer controlled by Russian billionaire Vladimir Yevtushenkov, slid as much as 11 percent to 319 rubles, as UniCredit called Moscow’s property market “overheated.”

Ukraine is just one - at this point extreme - example of the kind of level of default we can see among holders of forex loans across Central and Eastern Europe in 2009, and Unicredit is in the forfront of the exposure to these defaults, which means, effectively, that the medium term future of the Italian economy at this point in the hands of the CEE countries. Which is why Italy's biggest economic headache has a name, and that name if Unicredit.
Posted by Edward Hugh at 12:44 PM No comments:
Newer Posts Older Posts Home
Subscribe to: Posts (Atom)