Euro zone services activity slipped close to contraction in May, in line with expectations, as growth took a sharp hit in France, while inflationary pressures mounted, a key survey showed on Wednesday. The RBS/NTC Eurozone Services Purchasing Managers index fell to 50.6 in May, the same level as the flash estimate and as forecast by economists, from 52.0 in April.

The Italian services sector continued to contract in May (and contracted slightly faster than in April), according to the NTC purchasing managers' index which registered a seasonally adjusted 48.1 in May from 49.8 in April. This is now the sixth consecutive month of contraction. 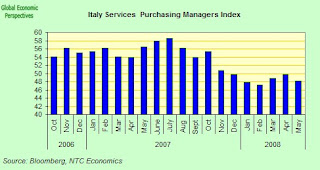 Posted by Edward Hugh at 1:44 PM No comments:

Italy's manufacturing sector contracted for a third straight month in May, putting in its weakest performance for three years, and casting an ever deeper shadow over growth prospects, an NTC/ADACI survey showed on Monday.


The NTC Research Purchasing Managers Index fell to 48.0 from April's 48.2, sinking further below the 50 divide between growth and contraction. 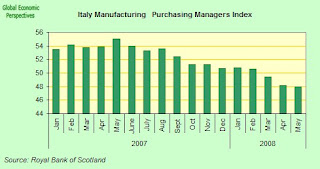 Euro zone manufacturing activity generally cooled further in May as factory output remained near a three-year low even while edging up slightly from the earlier flash estimate. There is also increasing evidence of a widening divergence between the big four economies in the 15-nation currency bloc with Germany and France continuing to prop-up a contracting Italy and a Spain which is in "free fall". This divergence is only going to add to the headaches over at the European Central Bank, which is already pretty worried about the continuing high inflation.


The RBS/NTC Eurozone Purchasing Managers Index for the manufacturing sector eased to 50.6 in May, down from April's 50.7 but above the earlier flash estimate of 50.5.


The survey underscores the tough task now facing Silvio Berlusconi. Economy Minister Giulio Tremonti has said growth will be "around zero" this year, worsening a trend which has seen Italy underperform most of its European peers for at least a decade.
The PMI survey showed employment levels fell for the fourth month running, new orders dropped for the fifth month running and output fell for the second month running.

"The fall in employment is likely to accelerate and the PMI at this level is consistent with a contraction of the economy," said Williamson, who forecast weak gross domestic product data in the second and third quarters.