Italian business men are slightly more optimistic this month than they were last month. This is the only real significance that can be attached to the latest reading on the ISAE business confidence index. Equally you could say that they were unduly short-term pessimistic last month given all the financial turbulence that was being commented on in the press. In the medium term all this will have consequences, but they are not being felt as acutely in the short term as many imagined.

The Isae Institute's business confidence index rose to 92.9 from a revised 92.4 in September, the Rome-based research center reported today. Manufacturers were more optimistic about their current prospects for production, with the relevant measure rising to minus three from minus seven, Isae said. Still, the report reveals considerable pessimism about prospects for the future. A measure of expectations for future orders fell to minus seven from minus six in September, and of particular note a measure of foreign orders fell to minus 10 from minus seven.
Posted by Edward Hugh at 11:23 AM No comments:

As I said in the last post, little by little we are now going to start getting eurozone data. Today Eurostat released the August new industrial orders data.

According to the report:

Among the eurozone countries which are most notably slowing at the moment I would single out Italy, Germany, Greece and Spain for rather close attention. Germany and Italy have long had their growth ups and downs, which have in the last decade been more downs than ups, but Greece and Spain (two of the three construction boom countries, the other being Ireland) have normally maintained a fairly strong profile through the downturns, and this has tended to take some of the edge of the recent weak periods. This time it may well be different, since the construction driven economies may well be even more affected than the "usual suspects", something which makes this downturn an even more problematic one.

Now if we look at the evolution in orders in recent months, we can see that everyone has been slowing to some extent (less growth, rather than outright contractions) and the German case particularly stands out for the much lower rate of expansion in new orders following the very good period earlier in the year.

If we look at the month on month changes, I would single out just how evidently Spain has been slowing, and the strong underlying weakness which is being revealed in Greece. Italy as we can see has shown virtually no increase in the level of new orders since the early summer.

The general German picture is only confirmed if we look at the data released today from the Federal Statistics Office which shows that building activity in Germany decreased 4.4% in real terms in August 2007 when compared with August 2006.

As reported by the Federal Statistical Office, the total price-adjusted value of orders received by building construction and civil and underground engineering enterprises in Germany decreased 4.4% in real terms in August 2007 from the same month of the previous year. In building construction demand slumped 7.6%, in civil and underground engineering it fell 1.3%. The number of employees amounted to 713,000 at the end of August 2007. That was a decrease of 28,000 (–3.8%) compared with August 2006.

This situation is clear enough if we look at the chart for German construction activity since the end of last year, using the Eurostat monthly data which only runs to July (ie to before the "financial turmoil" of August). The slowdown from the previous boom is clear enough. Now it only remains to be seen how far it goes. This situation in Germany is, at the end of the day, quite important for Italy, since Germany is an important customer for Italian exports. 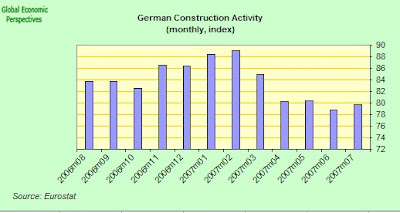 Posted by Edward Hugh at 3:48 PM No comments:

Well the real data that everyone has been waiting for on the eurozone is about to come rolling in, but just to keep us occupied in the meantime, we have another sentiment indexto look at, this time it is the Italian Consumer Confidence one.

Italian consumer confidence in October was unchanged from September as higher energy prices and signs of slowing economic growth weighed on optimism. The Rome-based Isae Institute's index, based on a poll of 2,000 households, held at 107.3, the same as last month.

It's hard to know what to make of this reading at this point. As I have often said I don't think we can eak too much pleasure or pain out of any one single data reading. The index level is, of course, still well down on the highs registered earlier in the year, and most of the real economic indicators are on their way down, with the exception of unemployment, of course, but I have already addressed this apparent anomaly here.
Posted by Edward Hugh at 2:37 PM No comments:
Newer Posts Older Posts Home
Subscribe to: Posts (Atom)