Italian fourth-quarter gross domestic product declined at the fastest quarterly rate in nearly 30 years, sending Europe's fourth-largest economy off into an even deeper recession. According to ISTAT preliminary estimates, Italian GDP fell 1.8% between Q3 and Q4 in seasonally adjusted and weighted daily average terms. If confirmed, the quarterly decline would be the sharpest recorded since 1980.GDP fell in the previous quarter by 0.6%. Year on year, overall output in the Italian economy dropped by 2.6% in Q4, down from both the 1.7% contraction expected and Q3's annualized fall of 1.1%.

Across 2008 as a whole, the Italian economy fell 0.9%, ISTAT said, the most pronounced decline recorded since 1993.The Italian economy officially fell into recession in the third quarter of 2008. And one more interesting detail, Italian GDP is now back at the same level it was in Q4 2005, and falling. This is pretty worrying, and even more so given there are quite a lot more people in Italy then there were in 2005. 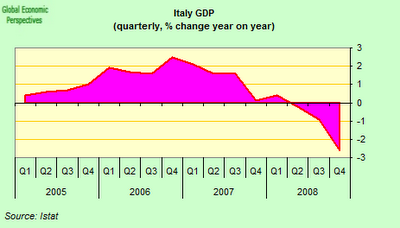