So Elections It Is

Well President Giorgio Napolitano summoned the speakers of both houses of parliament this morning to announce that he would be dissolving the legislature. By law, he then has to call an election within 70 days. According to Il Giornale, owned by Berlusconi's brother Paolo, the headline read "Here We Go". I can share the feelings if not the point of view which go behind such an editorial. Italy now passes into the hands of the gods I think.

Commentor Hans asked me in an early post on this developing crisis whether I saw any realistic alternative to the Prodi coalition. I had to admit that I didn't. Neither the Prodi coalition nor the Berlusconi one seem equipped to offer Italy the kind of policies she needs at the present time to get out of the mess she is entering as I write. So all I can do is mutter "here we go", roll my eyes, and look towards heaven.

My topic is economics, and the economics data is almost uniformly bad. Will an election do anything to help in this situation? I severely doubt it. What Italy needs to do is to wake up to the underlying and long term structural and demographic processes which are affecting it, and I very much doubt an election setting is the adequate place to get us on that road.

Indeed confindustria seem to agree with me since the head of the employers lobby Luca Cordero di Montezemolo is quoted yesterday as saying that Italy's ongoing political turmoil will only aggravate the effect of slowing economic growth in the U.S. and Europe and may lead the Italian expansion to stall even more than it would do this year.

``We will grow less than the other European countries this year and given the crisis, growth will likely be closer to zero than a higher level,'' Montezemolo, who is also chairman of Fiat SpA, told journalists during a conference in Milan. Confindustria's official growth forecast for Italy this year is 0.8 percent, though the ``situation is very difficult as far as consumption goes and in terms of economic growth,'' he said. Montezemolo said that the election law needs to be changed to ``guarantee governability.''

Indeed in saying that "growth will likely be closer to zero than a higher level", Confindustria seem to be moving nearer to my own forecast (which I think was the lowest one in the market when I made it) back at the begining of January.

More evidence of the storm clouds which are gathering. The latest of these is the January reading on the EU commission European Confidence Index. As can be seen in the chart, while there is some rebound in Ireland (the decline in previous month had been very steep), Spain continues its downward trajectory, and Italy continues to plunge. 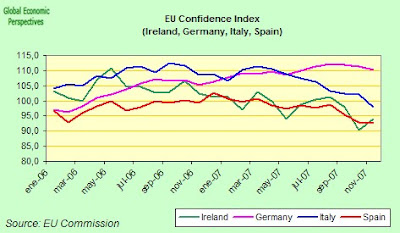 Also the general movement in the index across eurozone countries is also clearly downwards. 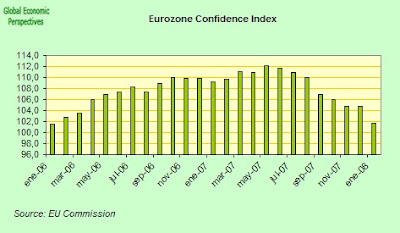 Finally a relatively trivial, but in some ways quite significant piece of data yesterday:

I am just adding some charts to accompany the discussion in comments, to try and clarify a number of points. The charts are Italian imports and exports, German imports and exports, and Italy GDP and exports growth. The central point is that a comparison of Germany and Italy is interesting and instructive since they both have the same (very high, 43) population median ages, they consequently both suffer from weak internal consumption, and need to depend on exports for economic growth. This is a fairly fragile combination, since it means that each time the rate of expansion in global growth slows there is a collapse in GDP growth (ie there is no possibility of decoupling), and it is quite clear from the German chart what happens next to the German economy, which is why Trichet changed his discourse last Thursday presumably.

The big and important difference between Germany and Italy is that Germany gets quite high rates of export growth during the good years, and runs a trade surplus. Italy gets comparatively low export growth rates (for an export dependent economy) even during the good times, and of course Italy's fiscal debt is now so large that there is little room (in fact none) for fiscal easing during the downturns. So Italy's target has to be to emulate Germany, even while knowing that this is not a complete solution, doing something is always better than doing nothing. 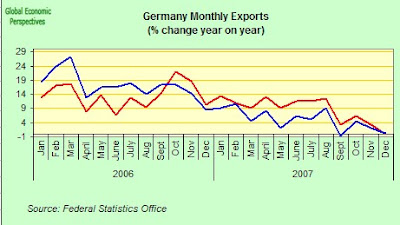 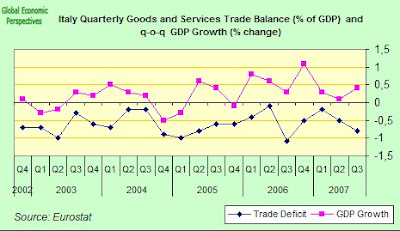 Europe's service industries grew at the weakest pace in more than four years in January, as the possibility of a recession in the U.S. weighs on the European expansion. Royal Bank of Scotland Group Plc's services index dropped to 50.6, the lowest since July 2003, from 53.1 in December. A reading above 50 indicates growth.

The slowdown presents a real headache for the view of European Central Bank that the euro region is strong enough to cope with a cooling U.S. economy and that inflation concerns prevents them from following the Federal Reserve into monetary easing. In the U.S., which is the second biggest destination for euro-area exports, the Fed eased monetary policy by the most since 1990 last month, to bolster the economy. 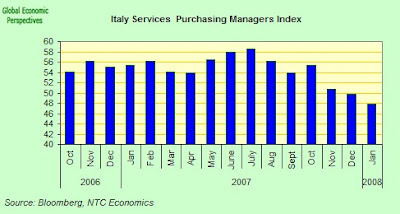 The national indexes fell across the board with Germany's service industry slumping below the 50 threshold for the first time in 4 1/2 years and Spain's service sector shrinking the most since the survey began in 1999. A composite measure for the euro region fell to 51.8 from 52.7 the previous month, according to the report, which is based on a survey of purchasing managers by NTC Economics.

The Italian services index fell to a seasonally adjusted 47.9 in January from 49.7 in December, reaching the lowest level since May 2005.

The International Monetary Fund last week cut its euro-region growth estimate by half a point to 1.6 percent, saying the turmoil in financial markets has spread to the rest of the economy. The IMF now expects the global economy to expand 4.1 percent this year, below the 4.4 percent pace projected in October.
Posted by Edward Hugh at 1:20 PM No comments:

Italy's inflation rate in January rose to its highest in at 11 years, driven by rising energy, transportation and food costs. Consumer prices calculated for the European Union harmonised CPI standards rose by 3.1 percent from January 2007, the fastest rate since this particular index was created in January 1997, according to data from the Rome-based national statistics office (ISTAT) today. Prices fell 0.8 percent from December because of post-Christmas retail discounts, and even though this fall was sharper than the 0.4% fall registered in January 2007 the rate still shot up due to the strong base effects of previous months. However, it is not at all clear what happens now, since the Italian economy is evidently slowing fast, and the drop in prices from December is significant. 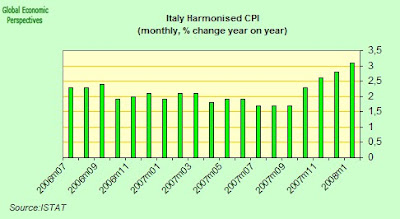 The most significant impact of this inflation data in the short term is that it virtually guarantees that the European Central Bank will keep interest rates at a six-year high of 4% when they meet on Feb. 7 since according to their statues inflation has to be a greater concern than slowing economic growth. Inflation in the 15 nations sharing the euro accelerated to a 14-year high of 3.2 percent in January according to the recent flash estimate, overshooting the bank's 2 percent limit for a fifth month.

In Italy, transportation costs, which include gasoline, rose 0.4 percent from a month ago, according to the national (NIC) index. No breakdown is given at this point of the EU-harmonized index, since this awaits the official publication by eurostat later in the month. Prices of housing, water, electricity and fuel jumped 1.5 percent in the month. Food and beverage costs rose 0.6 percent from December.
Posted by Edward Hugh at 12:45 PM No comments:
Newer Posts Older Posts Home
Subscribe to: Posts (Atom)