Italian industrial production declined again in July as economic growth remained between flat and non-existent and high oil prices increased costs and sapped consumer spending. Output was down 1.1 percent from June , following a revised decline of 0.2 percent in June, according to data from the national statistics office ISTAT earlier today.

Italian output has now declined on a year on year basis in 8 of the last 10 months, and if we look at the seasonally adjusted index, we will see that output touched a peak in December 2006, and has been steadily falling since.

Italian consumer spending and exports both declined in the second quarter, and as a result gross domestic product contracted making it very likely that Italy entered formally entered recession on 1 April 2008. The July industrial output data only serves to confirm this impression, although we should note that the price of oil hit a record $147.27 in July but has since fallen almost constinuously.

Fiat registered a 23 percent drop in car sales in Italy in August, so it is not clear that any relief is imminent. Although if we look forward to the August PMI data we have, Italy's manufacturing sector probably contracted for the sixth successive month in August, although perhaps it did so at a slightly slower pace than had been the case in the previous two months. The Markit Economics Purchasing Managers Index rose to 47.1 from July's 45.3, but still remained significantly below the 50 divide which separates growth from contraction. 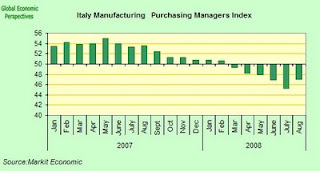