The Spain Treasury announced today that it was no longer willing to accept Italian government paper as collateral for short term loans. In part the move is a reflection of the deteriorating liquidity situation inside the Spanish banking system, and in part it reflects the rather negative outlook on Italian government debt as continuing lowest-low economic growth makes it difficult to see how Italy can possibly hope to balance its budget by 2011, thus making holding Italian government debt a progressively more risky decision as that deadline approaches.

Spain's Treasury has said it is nopw only willing to accept the highest-rated government debt as collateral for short-term loans, a move that will exclude Italian government bonds. As of July, Spain will only take AAA rated bonds registered with the Spanish clearing house Iberclear as collateral for overnight repurchase agreements, or repos, according to Enrique Ezquerra, deputy director of public debt at the Spanish Treasury. Since Italian debt has been systematically downgraded in recent years, and Standard & Poor's now rates Italy's debt at only A+, while Moody's Investors Service has it at Aa2 this clearly means that Italian paper no longer qualifies. Italy's debt rating was lowered by both Standard & Poor's and Fitch Ratings in October 2006 on concern that problems in containing the deficit would lead to further increases in what is already the EU's biggest debt by volume over the coming years.


Basically the Spanish Treasury lends surplus cash to broker-dealers to boost income from financial holdings and in return receives collateral. Following the sub prime crisis in the United States last August the Spanish government expanded the range of securities it would accept as collateral to include foreign government bonds and AAA rated private debt since the strong budget surplus Spain was running at the time meant in had plenty of cash on hand.

Now Spain's budget surplus is rapidly disappearing as government spending rises in the face of the rapid economic slowdown while income is decreasing. Also, the Spanish banks, for whom this measure was really intended are finding themselves in an increasingly difficult liquidity gridlock, hence whatever help, no matter how small, they can receive from the government is more than welcome. Thus this move needs to be seen more in a Spanish than an Italian context. It is however a warning shot for Italy, since Italian paper (after its Greek equivalent) is the most difficult to place of any European government (and particularly given its volume), thus the Spanish decision can also be seen as a desire for the little window they have opened to become a repository for unwanted Italian debt.

In a Bloomberg interview Enrique Ezquerra described the move as "a partial step back....We will continue accepting AAA corporate bonds listed in the Spanish fixed-income market. This includes asset-backed securities and covered bonds.'' Perhaps I would say rather than a step back it is an attempt to close a loophole and focus attention on the real problem which is how to fund the Spanish cedula hipotecarias (the local version of mortgage-related covered bonds).

I would also say that this relatively small and seemingly trivial decision is just one more symptom of the sort of strains the eurozone's "twin deficts" (Italy's public debt - circa 103% GDP 2007 - and Spain's current account deficit - 12% GDP Q1 2008) are likely to place on the smooth working of the eurosystem ten years after it was originally set in motion.
Posted by Edward Hugh at 10:07 AM 3 comments:

Italian consumer price inflation accelerated sharply in May to its highest level since August 1996, as energy and food prices continued to surge, final data from statistics office Istat confirmed last Friday. Italian inflation rose 0.5% on a monthly basis and 3.6% on an annual one in May, up from 0.2% and 3.3% respectively in April. While economists had expected a slight jump in CPI growth to 0.3% month-over-month, the consensus had forecast no change from April's annualized increase.

Italian EU harmonized CPI also surprised to the upside. Month-over-month, HICP increased 0.6% in May, up from the 0.4% growth rate expected, but unchanged from April's reading. Annually, HICP rose 3.7%, up from the 3.6% expected 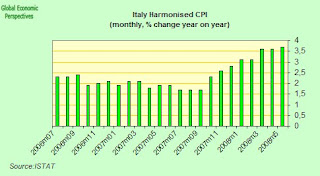 Eurozone inflation accelerated to its highest level in 16 years in May as food and energy costs soared, intensifying what finance ministers from the G7 nations recently described as a "more complicated'' dilemma.

The inflation rate in the euro area rose to 3.7 percent, the highest since June 1992, from 3.3 percent in April, according to eurostat. The rate for May is higher than the 3.6 percent flash estimate published on May 30.

Food-price inflation accelerated to 6.4 percent in May from 6 percent in April, while energy prices rose 13.7 percent from a year earlier, up from a 10.8 percent increase the previous month, according to Eurostat.

Italy's consumer association Federconsumatori has announced that it considers the official rate of inflation given by Istat to be an "underestimate". According to its calculations, in the energy sector alone, forecast increases for a typical family 2008 are 709 euro in direct costs (electricity, gas, heating and fuel) and 546 euro in indirect costs, giving a total of 1,255 euro. They also highlight the rapid increases in the price of food, for which they put a figure of 520 euro. Added to these items are increased costs for insurance services, transport, bank services.


This gives a total increase for all expenditure items of around 2,070 euro, which they calculate would put the rate of inflation for the average family at something like 7 percent. In the light of their findings Federconsumatori are suggesting the Italian Government should rapidly put measures in place to return to families on fixed incomes, be they employees or pensioners, their old level of purchasing power, suggesting an increase of at least 1,200 euro per year.

Not surprisingly such figures going the rounds are causing a lot of debate and consternation, which presumeably is putting considerable pressure on Berlusconi and Tremonti, and hence their somewhat "out of consensus" proposals at the G7 summit this weekend.

Belusconi was arguing for "targeted'' tax cuts on fuels while Finance Minister Giulio Tremonti last week suggested oil companies be forced to pay a "Robin Hood'' tax with the revenues being passed to households. The point is that none of these ideas, either that of the consumer association, or the Italian government suggestions seem to get through to the harsh reality of the situation, which is that this is not a temporary spike in prices but is part of a much longer term process whereby rapid growth in some very populous emerging economies is putting (and will continue to put) systematic strain on what are in capacity terms finite and limited resources. As such living standards in the main OECD countries seem almost certain to fall, at least slightly, as the central banks apply pressure to try and reduce the likelihood of "second round effects" which would only produce a circular inflation perpetuation effect rather than any real alleviation of the problem.

And what Federconsumatori seem to fail to realise is that after many years of the sorry public deficit problem, Italian finances are in no position to bring much in the way of relief to the fixed income groups. This is not a happy situation, but doing something about the deficit years ago might have meant more capacity to react now, but spilt milk is, unfortunately spilt milk, and what has been done has been done.

I have a much more substantial analysis of some of the factors behind the global spike in food prices in this post here.

The Italian government this morning unveiled a three-year plan in an attempt to revive growth and contain the deficit. The package includes spending cuts and additional taxes on banks and energy companies.

The 2009 budget proposal includes about 8 billion euros ($12 billion) in spending cuts, according to a draft Finance Minister Giulio Tremonti showed to Italy's labour union yesterday. The 13 billion euros of budget adjustments - additional revenue and reduced spending - has as its objective keeping the deficit at 2.5 percent of gross domestic product this year, up from 1.9 percent last year.

In an attempt to boost spending and confidence, Berlusconi's newly elected government passed in May tax cuts on property and overtime pay. To make up for the lost revenue, Tremonti is now raising taxes on oil and financial-services companies. The government also announced it will raise the corporate tax bracket IRES to 33 percent from 27 percent for oil companies, reversing a tax decision made just last year by the previous government of Romano Prodi.

There will be 34 billion euros-worth of adjustments in the next three years, consisting mainly of spending reductions, according to the three-year financial plan, which will serve as a blueprint for next year's budget. The adjustment will be 7.3 billion euros in 2010 and 14.6 billion euros in 2011. It is hoped that this will allow Italy to meet a target to balance its budget by 2011, although of course there are very considerable downsiide risks here, as the spending cuts (at least those which are not balanced by tax reductions like the property tax and overtime pay decisions) will impact negatively on headline growth performance, and this was already looking pretty weak.
Posted by Edward Hugh at 4:50 PM No comments:
Newer Posts Older Posts Home
Subscribe to: Posts (Atom)