Addio, Dolce Vita, Or Twilight of the Idols?

According to the Economist:

"For all its attractions, Italy is caught in a long, slow decline. Reversing it will take more courage than its present political leaders seem able to muster"

These words come from John Peet Europe Editor of The Economist. You can hear a podcast interview with him here (windows media player).

As the economist survey says:

AT FIRST blush, life in Italy still seems sweet enough. The countryside is stunning, the historic cities beautiful, the cultural treasures amazing, and the food and wine more wonderful than ever.....

Yet beneath this sweet surface, many things seem to have turned sour. The economic miracle after the second world war, culminating in the famous 1987 sorpasso (when Italy officially announced that its GDP had overtaken Britain's), is well and truly over. Italy's average economic growth over the past 15 years has been the slowest in the European Union, lagging behind even France's and Germany's (see chart 1). Its economy is now only about 80% the size of Britain's. Earlier this year Italy briefly tipped into recession; for 2005 as a whole, its economy is likely to be the only one in the EU to shrink. Growth next year is expected to be anaemic at best.


Just how anaemic this growth has been can be seen from this chart (from the Economist article): 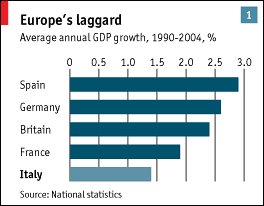 Part of the problem is that as populations age growth seems to slow down. My best guess is that as this ageing continues growth may slow down even further, and even turn negative at some point. Some evidence for this statment can be found in the most recent performance of the German, Japanese and Italian economies (the world's three oldest countries) which I have posted about here and here (on the Demography Matters blog).

Meantime last November Time Asia took time out to compare the relative evolution of China and Italy, and the comparison, of course, did not run in Italy's favour:

Italy is the sick man of Europe these days—its economy has shrunk by 4% since 1999 after adjusting for inflation...... Along with Germany and France, the nation has been struggling with weak consumer spending, waning productivity and rising government deficits. But unlike its neighbors, Italy lacks robust large corporations that can export their way out of trouble. Many of the thousands of small and medium-sized companies that once gave the Italian economy its flexibility and dynamism are poorly equipped to deal with the challenges of a fast-changing world. Most don't have the scale, the funding or the commercial know-how to become global players. What they produce is beautiful, but it's neither particularly sophisticated nor difficult to replicate. In other words, Italy's economic structure is almost perfectly shaped for an attack by China, which excels in moderately sophisticated manufacturing—and can turn out products far cheaper than is possible in western Europe. In sector after sector—from textiles to shoes to furniture—companies have been losing ground.

When Italian manufacturers ran into competitive problems in the past, there used to be an easy fix: currency devaluation, which made Italian exports cheaper relative to those of other countries. But that solution is no longer a panacea, because Italy swapped the lira for the euro, which has risen against most other currencies. "We used to say small is beautiful, but that's no longer true," says Adalberto Valduga, president of the regional chamber of commerce in nearby Udine, the provincial capital. While the strong euro is penalizing firms, he says the real challenge is a more fundamental one: "We need to change our way of thinking." The International Monetary Fund agrees. In a tough report last month, it castigated Italy's economic policies and said the nation's waning competitiveness was due to "deep-seated inefficiencies" as much as to foreign competition. China looks set to overtake Italy this year as the world's sixth-largest economy after several years of jockeying for the spot.
Posted by Edward Hugh at 2:50 PM

Anonymous said...
This comment has been removed by a blog administrator.
4:52 PM