The Future of Young People In Italy 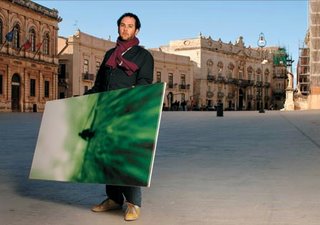 Following up on my earlier post about the problem of graduate out-migration from Italy, Roberto has drawn this Time magazine article to my attention. I really like the photo since somehow it draws attention to that combination of the old and the new which, if people only could find the way to work with it, could serve as a basis for moving things forward in Italy. A nice crisp winter's morning, just like we have in Barcelona today.


Growing up, Italian teenagers learn the tale of Giotto and the fly. As a young apprentice in 13th century Florence, the aspiring painter sketched a fly on the nose of a portrait his master-teacher Cimabue was finishing. So lifelike was the insect that when the elder painter returned to the studio, he repeatedly tried to swat it off the canvas. Realizing he'd been fooled by the bravura talent of his pupil, Cimabue told him: "You have surpassed your teacher." Thus encouraged by his master, Giotto went on to revolutionize Western painting, and posterity regards him as the man who launched the Italian Renaissance.

Fast-forward to Italy 2006, and the image of the precocious apprentice has been replaced by a humbler figure: the underemployed 30-something despondent about the present, let alone the future. Today's Italy is defined by stories like that of Vincenza Lasala. At 32, four years after graduating with honors in mechanical engineering, she is living with her parents in the same house where she grew up. She has sent more than 200 résumés to large corporations and small companies around the country, but all she has managed to secure are a handful of part-time stints, unpaid internships and training programs. From her home in the sleepy southern town of Avellino, near Naples, a frustrated Lasala speaks for much of Italy's younger generation: "Without a job, my parents are basically still in charge of my life. After all my studying, I don't see the fruits of my effort. Right now, I can't even envision my future."
Posted by Edward Hugh at 12:06 PM

I wonder if this mechanical engineer Vincenza Lasala speaks English, at least at a very basic level. After my experience with young Italians, I wouldn't be surprised if the only words that she knows are "OK" and "hello". Maybe this is the reason why so many of them have trouble getting a decent job.

Your blog is really interesting to read, Edgar. I studied last academic year in Italy and grew quite curious about what is happening to Belpaese -and regarding that, this blog is certainly among my favourites.

If you haven't read it yet, here's
one article by NY Times of the Italian youth, or rather lack of it.

By the way, can anyone guess how old is the eldest of Italian Senate? Well, quite old.

The New York Times is right, aapo, all of Europe has suffered from declining birthrates, but perhaps nowhere has the drop been as profound and prolonged as in some Italian areas (Genoa is only the edge of an iceberg).

Yet, one may find it difficult to understand the following statement:

“Government efforts to reverse the trend are not working. Cash payments for births, for example, have failed to inspire a leap in fertility rates.”

What government efforts was the nyt talking about?
Payments for births? A handful of dust. Ridiculous stuff.

“The new government of Romano Prodi has created a Ministry of Family to address the population problem, but acknowledges that it will be an uphill battle …”

Aknowledgements like this are precisely the reasons why the battle will be an uphill one ...

There is no future for young people in Italy.