Italian consumer confidence fell to a four-month low in December as signs that economic growth is slowing prompted households to cut back on spending. The Rome-based Isae Institute's index, based on a survey of 2,000 families, fell to 107 from 107.6 last month.

A 48 percent jump in oil prices this year is raising household energy costs while a lorry driver's strike has disrupted this months delivery of basic foods such as milk, boosting grocery bills. Higher credit costs sparked by rising mortgage defaults in the U.S. are also starting to weigh on consumer optimism in what is still Europe's fourth-largest economy.

The biggest concern expressed by consumers concerned the outlook for the economy. Optimism about the general economic situation fell to 89.6 from 91 with confidence about future prospects dropping to 112.5 from 113.7, Isae said.

Consumer spending has been consistently weak in Italy in recent years. Retail sales declined for a ninth month in November, accordig to the Bloomberg sponsored purchasing managers index showed.

The pace of household spending slowed to 0.2 percent in the third quarter, compared with growth of 0.6 percent in the previous quarter, according to the ISTAT National Accounts data. 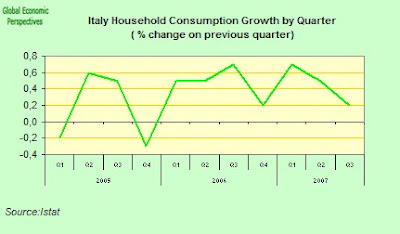 Italian economic growth has lagged behind that of most other counties in the eurozone for more than a decade now (the other weak party is Germany in this regard). The Italian government cut its growth forecast (29 Sept) for next year to 1.5 percent from an earlier 1.9 percent forecast. The Italian government is still more optimistic than the European Commission, however, since the latter estimate Italy's 2008 growth rate at 1.4 percent, and there are plenty of downside risks all round here.