Well the storm cluds certainly continue to gather over the Italian economy. We learn today that Italian industrial production fell for a fourth month in December as slowing economic growth cut demand for manufactured products. 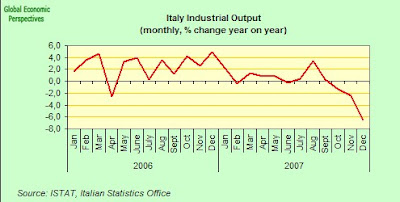 The line from August you can see in the chart above seems very clear. And if we put the data on industrial output together with that for retail sales and the evolution in the trade deficit, then the possibility certainly exists that Italy fell into recession in Q4 2007. Anyway we shall all soon know, as ISTAT will be releasing provisional data before the end of the month.

The drop in Italian production in December contrasted with the situation in France, where a gain output expanded, according to the French Statistics Office INSEE, and French industrial production rose a month on month 0.7 percent.

The decline in production may well be continuing into 2008, since Italian business confidence declined to a two-year low in January as a bleaker economic outlook hurt consumer demand for manufactured products.

Confindustria, Italy's largest employers' lobby, cut its 2008 growth forecastin December to 1 percent, about half the estimated pace for 2008. The Organization for Economic Cooperation and Development also cut its forecast for 2008 Italian growth on December 6th to 1.3 percent, from the 1.7 percent predicted in May. All these numbers may well now be subject to considerable downside risk.
Posted by Edward Hugh at 12:31 PM

Well italys situation doesn't seem to get any better! Doesn't entirely surprise me, I wonder if there will be any growth at all in 2008. I think it depends on two things; 1 whether the new italian goverment can install confidence in the italian business community by promising to reform Italy's tax and pension system. The retirement age must be raised immediatly to 65 and soon to 70. If the new goverment can tackle the problem of corruption in the south maybe foreign companies will invest there? If the world economy in general experiences more growth than expected that too would boost italy. Unlikely, but possible. For me Veltroni has to get in (i don't trust either, but veltroni has at least done a good job with Rome and he is 'only' 52) berlusconi's re-election would be disasterous both for the economy and for Italy as a whole. I don't know how he is ahead in the polls...Surely italians have learned from the mistakes of the past. It is symbolic that Walter Veltroni has asked Roberto Saviano (author of gommorah which exposed how deeply embedded the camorra is in italy) to stand for the party. I hope that this means change, but of course you can never tell with politicians!

"I wonder if there will be any growth at all in 2008. I think it depends on two things; 1 whether the new italian goverment can install confidence in the italian business community by promising to reform Italy's tax and pension system. The retirement age must be raised immediatly to 65 and soon to 70."

I entirely agree with your sentiment, although I am not optimistic in the short term. I fear things are going to get worse before they get better. If they get better, and whether or not they do depends on the kinds of issue you are talking about. I think reality check time is getting nearer.