As Italy Enters It's Fourth Recession Since 2000, Who Will Bail-Out Unicredit?

Italy, which is still the eurozone's third biggest economy, slipped into a recession in the third quarter. The Italian economy fell into what is now its fourth recession in less than a decade as gross domestic product shrank 0.5 percent from its level in the second quarter, when it contracted a revised 0.4 percent, the national statistics office said today. This is already Italy's worst recession since 1992, and there is evidently more and worse to come. 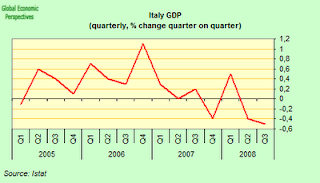 Italy effectively followed Germany, Europe's largest economy, in posting two consecutive quarters of contraction -- the technical definition of a recession. Spain contracted on the quarter, while France narrowly avoided recession by posting a slender 0.1% expansion after contracting in the second quarter.


From the third quarter of 2007 the economy contracted 0.9 percent, and this was the sharpest year on year quarterly decline in more than 15 years. ISTAT will provide a detailed breakdown of the GDP figures when it releases its final report on Dec. 12. 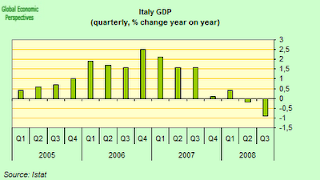 The IMF recently forecast that the Italian economy will shrink 0.1 percent this year and 0.2 percent next year, while Italy's employers organisation Confindustria are forecasting a 0.2 percent contraction this year. Making a rough, back of the envelope, calculation, if the economy once more contracts by 0.5 percent in the last quarter, we could be looking at a 0.4 percent contraction this year over 2007, and a year on year drop of around 0.9% again in the last quarter.

The real problem being raised here is not so much the recession itself, but the long term trend growth of the Italian economy in the light of the need to sustain a sovereign debt in the region of 104% of GDP and financing a rapidly ageing population. As can be seen in the long term growth chart below, Italy's growth rate has been steadily dwindling for some time now, and it is clear that this tendency is not going to be reversed any time in the near future.

Just how delicate all of this now is is highlighted by Italy's programme to help the banking system cope with the consequences of the global financial crisis, and deal with the impact of the economic unwinding which is currently taking place in Eastern Europe, which was finally approved by the European Commission earlier today (Friday).

The Commission said in a statement that the plan to offer guarantees for new banking debt and other aid was needed to remedy serious disturbances in the Italian economy.

"The Italian guarantee and swap scheme is an effective instrument for boosting market confidence and the commitments we have secured from the Italian authorities ensure that distortions of competition are kept to a minimum," EU Competition Commissioner Neelie Kroes said in a statement.

The Italian government says its conservative banking system has been hit less hard than others by the crisis, but even so the government has offered to swap up to 10 billion euros ($12.5 billion) in government bonds in temporary exchange for other forms of debt held by banks, and in any event it is by no means clear that the Italian banks will not be hit hard by what is now to come in the East of Europe.

This sum the Italian government has set aside compares with the Austrian government's 100 billion euro ($129 billion) banking package. Despite being a small country, Austria has a fairly large exposure to the East European banking system (equivalent on some estimates to 100% of Austrian GDP), but the exposure of Italian banks (and in particular Unicredit) is hardly negligible.

In reality, most of the capital that is being "readied up" in Austria is destined for use in underpining lending in CEE countries including Romania, Hungary, Bulgaria, Poland and the Baltics. As the Eastern Euopean euro-pegs break or the currencies slide, domestic households will have to be "eased of" CHF and euro denominated loans, and the subsidiaries of Austrian, Belgian, Swedish and Italian banks look set to have to eat large loses as a consequence.

"That this is about providing credit to Austrian companies is just a pretense," said Matthias Siller, who manages emerging market funds at Baring Asset Management. "This move is a clear commitment to eastern Europe......But this has nothing to do with charity. Those (Austrian) banks are system-relevant banks in central and Eastern Europe, and if they had to withdraw capital from there, this would set off a landslide," he said.

By tapping their home governments, those banks who have significant CEE exposure effectively lean on taxpayers in their home countries for refinancing countries with large current account imbalances, and large forex household debts. In other words Italian taxpayers are going to have to fund the losses Unicredit and other Italian banks will accumulate on their CEE lending just as the US Treasury is having to fund United States sub-prime loses. The difficulty is, however, that Italian taxpayers are already "in hock" up to their eyeballs, and if people aren't careful Italians could end up paying for some of the CEE loses with part of their future pension entitlements.

This is why this is no simple and ordinary "technical recession" and why the issue of where the money is going to come from to refloat Unicredit should the worst come to the worst, is the NUMBER ONE question facing the European bank bail out at this point in my humble opinion.
Posted by Edward Hugh at 11:30 AM