It isn't only the bank bailout programme which is suffering in Italy due to lack of sovereign borrowing capacity. (See here for the full background on Unicredit and EU Bonds). I couldn't help noticing this piece in Bloomberg earlier in the week.

Italian Labor Minister Maurizio Sacconi said the government can’t provide unlimited unemployment benefits, La Stampa reported. The government is concerned about unemployment and has freed up about 8 billion euros ($10.3 billion) in regional aid that local entities can tap into, Sacconi told La Stampa in an interview. Still, “we cannot leave the taps running,” Sacconi was also cited as saying.

So as the recession deepens, and layoffs spread, the Italian government is obviously going to have problems keeping people afloat. Which lead me to think, maybe there are two ways to do this, the regular, and the irregular one. And maybe Italy is the ideal place for the application of rather more "unconventional tools" in fighting the crisis, especially since money for the conventional ones is beginning to run scarce.

And as can be seen in the graph which Zipfel prepares (see below) recent data show the extent to which these measures are important in keeping unemployment down in Germany. Since the end of November 2008, the number of applications (by both individuals and companies) for funding for short-time work resulting from the economic downturn has soared, affecting above all the mechanical engineering, metal processing and car-making sectors. Even though the number of filings does not reveal how many people are actually in short-time work, the measure does offer a useful indication of how companies are using the measures. In particular the data reveal that nearly 300,000 endangered jobs will not be lost, at least for the time being. 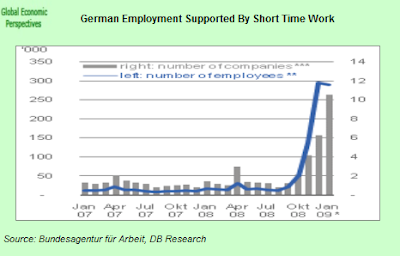 Zipfel explains how the system works:


Germany’s federal agency for employment (BA) will provide funding for short-time work based on business cycle or economic reasons under Section 170 of the Social Security Code (SGB III) if certain conditions are met (among other things, at least one-third of a company's staff must be affected by loan cuts of at least 10% of their monthly gross pay). If this is the case, the amount paid by the BA for each eligible employee is based on 60% (or 67% for employees with children) of the flat-rate calculation of the missing net pay. Employers continue to pay their employees but will be reimbursed by the BA. If, for instance, the hours worked in a company are reduced by half, the employee will receive only half of his/her normal pay. The BA will then pay the employee 60% of the other half of his/her wage or salary. Thanks to substantially reduced wage costs, companies can usually manage without lay-offs, which benefits both sides: employees can keep their jobs and the company its experienced staff. The reduction of working hours and disbursement of funding for short-time work are tied to certain legal provisions. Besides business cycle-induced funding for short-time work there is also seasonal funding for workers of companies in the construction sector who receive compensation for bad winter weather.

Now lets take a look at how things are done elsewhere. In Italy there are basically two types of unemployment benefits:

1) The Ordinary Redundancy Fund (cassa integrazione ordinaria) which applies in case of events such as a market crisis, i.e. problems not related to particular workers or individual employers, and offers a maximum of 12 months in 2 years, and a maximum of 3 months continously.
2) The Extraordinary Redundancy Fund: this comes into operation when production stops completely (in the event of serious sector crisis, bankruptcy, ...), and the employer decides to ask for state support. The Fund offers up to 36 months in any 5 years period and applies only to firms with more than 15 employees.

Now, according a recent Italian public TV programme on the misuse of Redundancy Funds in Italy, a lot of companies - especially in some areas of Southern Italy (and in Puglia in particular) - are directly cheating the state, by sending their workers home under the Redundancy Fund procedure, and then re-employing them "in an informal way" and paying them under the counter (UTC employment?).

So, the state is paying to the workers - lets say - 600 € from the Redundancy Fund, the employer 250-300€ under the counter, and the company can keep going. In this way workers get approximately 100% of their full-time salaries, and the Italian government doesn't need to announce any special "stimulus" measures which might make ratings agencies nervous.

According to the economist Tito Boeri, interviewed during the report:

- the Italian underground economy is around 15-17% of the Italian GDP, 300 billion €/year. Some estimates: up to 25% of the GDP
- that means at least 100 billion €/year less income from taxes for the state
- the industries living from the underground economy are profiting from the state aid, in this way distorting the market and undermining the future of more productive companies
- in Italy the unemployment benefit system does not work effectively
- many people with a university degree and working in Italy are hiding their qualifications to get a post for which they are over-qualified
- growth in the Italian economy is essentially driven by growth in low-qualified jobs

Well, as I said, there are many ways to skin a skunk, and perhaps this particular one is what Italian Finance Minister Giulio Tremonti had in mind when he recently stated that that Italy may not be faring as badly as GDP figures suggest because they don’t include the so-called black economy, worth about 17 percent of overall economic output.
Posted by Edward Hugh at 4:26 PM