Employment and Unemployment in Italy Q1 2008

Italy's unemployment rate rose slightly in the first quarter of 2008, reaching its highest level in over a year, adding to concern that the slowdown in the eurozone's tird biggest economy is deepening. The jobless rate increased to 6.5 percent from a revised 6.2 percent the previous quarter. This was the highest level since the third quarter of 2006. 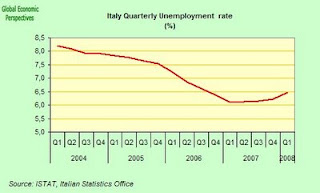 It is generally anticipated that Italy will expand at the slowest rate of any euro-region country this year, and Confindustria yesterday cut its 2008 growth forecast to 0.1 percent, a third of last year's rate, as rising food and energy prices and the euro's gain against the dollar put pressure on both consumers and exporters.

There were 16,000 job losses in construction and 11,000 in manufacturing from the last quarter of 2007. The total number of unemployed increased by 205,000 from the same period a year earlier, the first annual increase in five years.


Italian unemployment has steadily declined from a peak of 11.4 percent in 1998, after labor laws were loosened the following year and legal immigrants swelled employment in construction and agriculture. The changes made it easier for companies to hire part-time and temporary workers who don't enjoy the same benefits and job security as full-time staff.

There are signs that the flow of migrant workers into Italy may be ebbing on the back of the slowdown. The number of non-Italians employed dropped to 1,519,000 from 1,584,000 in Q4 2007. This was the second consecutive quarter that migrant employment has dropped. 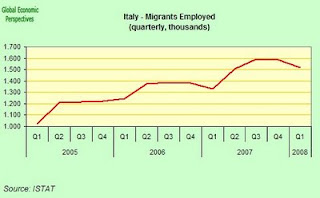 The Q1 data illustrates the shift toward more precarious work. While the total number of those employed was up by 1.4% year on year (at 23.17 million) the composition of those employed shifted. The number of full time workers was almost stationary at 19.87 million (up just 50,000, or 0.25%). Workers with temporary contracts working full-time, however, were 0.7 percent from a year earlier, while the number of part-timers with on temporary contracts jumped 11.2 percent from the first quarter of last year. 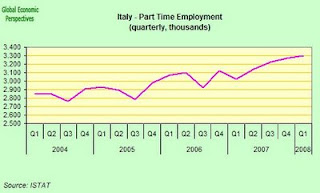 While the number of part-time workers has steadily increased, those working on temporary contracts has been in decline since last summer, and reached 2.189 million in Q1, only 63,000 above the 2.126 million of Q1 2007.


Regional disparities in unemployment also persist. The jobless rate in Italy's industrial north was 3.7 percent in the first quarter, compared with 11.8 percent in the south of the country.
Posted by Edward Hugh at 3:35 PM

The unemployment stats are up but I still see many high paying jobs posted on employment sites i.e.

Well there are always jobs on offer, even in the severest of recessions, since there is always employment churn, and people are always starting new businesses. It is just that in periods of weaker growth the ratio of offers to seekers changes.

But the Italian economy isn't even in sharp decline. It is more or less flatlining around zero % growth, and IO would expect it to stay there for some time. This is very different from, say, Spain, where the economy is contracting sharply.

But, despite the small recent increase in Italian unemployment it is important to remember that unemployment levels are still not far from historic lows. That is the labour market remains tight.

Among native Italians the labour force has now peaked (that is the only new source of labour is effectively from immigration), and hence the labour market has a more or less natural inbuilt tendency to tighten as more people retire from economic activity than enter at the bottom end.

But lastly, and this is very important in the Italian context, there is a skills mismatch. The skill set the incoming migrants have to offer does not compensate for the skills being lost by those large numbers of young Italians who are leaving, so clearly there may well be strong skill shortages for bright, young, and highly educated professionals. I have written about this on a number of occasions (for example here).