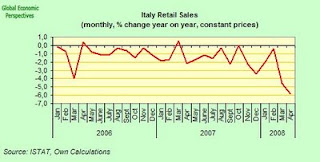 And by June the situation had deteriorated even further according to the latest Purchasing Managers Index (PMI) reading. Italian retail sales declined for the 16th consecutive month as rising oil and food costs eroded consumers' disposable income, the Bloomberg purchasing managers index showed. The seasonally adjusted retail sales index fell to 36.3 from 38.8 in May. The index is based on a survey of 440 executives compiled for Bloomberg LP by Markit Economics. A reading below 50 indicates a contraction. 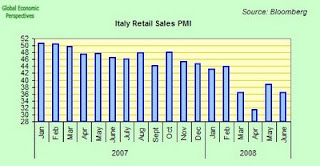 Obviously the continuing inflation and negative consumer sentiment are affecting sales. Italian consumer confidence fell more than economists expected in June to near a two-year low, because of rising prices, according to a June 24 report.

More than 55 percent of the Italian retailers surveyed said they missed their June sales target, and profit margins tightened as they tried to lure customers with discounts. About 38 percent reported paying higher wholesale prices for the goods, they sell, according to the report.

The decline in Italy was mirrored by falling sales in France and Germany, pushing down the European retail sales index to 44 from 53.1. That was the second-biggest drop in the survey's four 1/2-year history.
Posted by Edward Hugh at 7:16 PM