Italy's inflation rate was up agin in June to the highest in over 11 years as food and energy costs continued to rise. Consumer prices calculated using the European Union Harmonised methodology were up 4 percent from a year earlier, the most since the index was created in January 1997, and up from 3.7 percent last month, accodring to the national statistics office (ISTAT) today. Consumer prices in Italy rose 0.5 percent in June from the previous month, 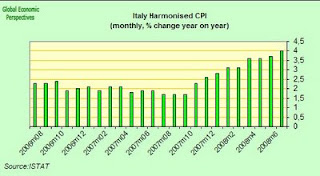 Consumer prices are rising all across Europe even as economic growth slows. Oil prices have almost doubled in the past year and are near a record high today. European Central Bank President Jean-Claude Trichet and his team at the ECB will probably raise the bank's benchmark interest rates this week by a quarter-point to 4.25 percent. This will mean that economic activity in Italy will be under pressure from rising interest rates, fiscal spending reductions and the high euro all at the same time, and at the very moment when the Italian economy is showing considerable weakness.

At the same time Italian producer prices rose to their highest in at least eight years in May to 7.5 percent, according to additional data from the statistics office today. Energy costs for manufacturers are 21.5 percent over the last year, according to the report. 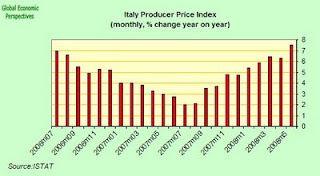