Italy has committed itself to guarantee bank deposits and provide sufficient funds to stop any lender in the country from failing, according to a statement from Finance Minister Giulio Tremonti.

Italy's ``banking interventions will be on a case-by- case basis,'' according to the statement Tremonti made in the Italian parliament today. ``That's why we didn't give any numbers for the amount of possible interventions. We will do what is enough.''

The Italian government said on Wednesday night it would provide funds for the country's banks if necessary and the newspaper Il Sole-24 Ore said said the plan called for a 20 billion-euro ($27 billion) fund. At the present time we are all very short on details about what the plan will actually involve.

In general terms Italy is going to accept bank shares without voting rights in exchange for capital and act as a lender of last resort. The Bank of Italy will also ease rules on the collateral that lenders are required to deposit with them.

Tremonti stressed that any eventual aid would not jeopardize Italy's commitment to keeping its budget deficit below the European Union limit of 3 percent of gross domestic product. This is the part of the plan I do not understand, unless he is about to announce cuts in public spending of equal magnitude to compensate for the bank support. I think we need to be clear that these measures by governments accross the developed world are simply transfering private bank debt to public debt, so of course there will be public balance sheet implications. The original plan seems to suggest an increase of 1% to 1.5% in public spending, but if they really are intending to "do whatever is necessary" (remember domestic demand in Ukraine and Russia is sinking like a stone at the moment, Kazakhstan has had a "sudden stop", while the Baltics have just had a "hard landing", and these are all areas where Unicredit is quite exposed) then the quantities involved could grow rapidly, and we could move to a threat to Italy's banks to a threat to its sovereign debt in almost a blink of an eye when the dust settles here.

Berlusconi Hits Out At Unicredit


In a move which would seem to be to be at one and the same time ill advised and poorly-informed Italy's prime minister yesterday hit out at Italy's second bank by market capitalisation (and first by assets) Unicredit in the Italian parliament.

While insisting that the Italian banking system was solid and that the state would intervene if problems emerged, Silvio Berlusconi took the advantage of the opportunity offered and uggested that UniCredit had only been facing problems in recent days because of its lending pracices and resulting exposure to the German market.

“There is only one bank which had bought a German bank and that is UniCredit,” said Mr Berlusconi. “UniCredit was called by the Bank of Italy to recapitalise and cover the losses made by this German affiliate. The capital was found in the private market and the problem was solved.”

The Italian prime minister’s comments were seen as part of efforts to reassure Italians that any effects of the international financial crisis came from outside the country and not from the domestic financial sector.

UniCredit’s share price was battered last week by massive selling as investors felt its lack of capital and extensive European business would leave it vulnerable after banks such as Fortis and Dexia collapsed.

Meanwhile Italy's S&P/MIB Index dropped for the fifth consecutive day on Friday morning, losing 1,747, or 8 percent, to 20,124 and taking this week's decline to 22 percent, with Unicredit sinking 32 cents, or 12 percent, to 2.35 euros. Banking stocks dropped in Europe on concern the deepening credit crisis will spur the failure of more financial companies and create a recession. Intesa Sanpaolo SpA (ISP IM) and Banca Monte dei Paschi di Siena SpA (BMPS IM), Italy's other major banks, fell 11 percent to 2.72 euros, and 7.3 percent to 1.52 euros, respectively. Trading in the shares of Intesa Sanpaolo, which is Italy's biggest bank by market value, had been suspended yesterday following excessive declines in Milan trading.

The Milan-based bank lost 18 cents yesterday, or 5.4 percent, to reach 3.12 euros, before being suspended.

Also Italian Finance Minister Giulio Tremonti is reported by Corriere della Sera to be preparing a "Plan B" to give banks more liquidity and guarantee loans. It appears the Tremonti proposal would allow banks that are short of cash to buy guarantees from the government that would enable them to provide financing. According to CdS Tremonti discussed the measure with the Bank of Italy on Oct. 8, and the government is now waiting to see how the European Central Bank's new emergency funding mechanism for bank works before deciding whether to use the plan. As far as I can see this is simply tantamount to the Italian government stepping in and replacing the Credit Default Swap market, with the assumed risk that if the is a major systemic problem in the Italian banking sector, then it will be Italian public finances which suffer the meltdown like the one we have just seen in the US insurance company AIG.

Berlusconi's comments about Unicredit are irresponsible since they are directed to a domestic electorate and not to the international financial community who need reassurance on Unicredit, not verbal castigation of it, and they are ill-informed since while Unicredit does have exposure in Germany via HVB, this is not where the real action is going to be, since the lions share of the losses are likely to be in Eastern Europe, and in part via the Austrian (ie not the German) route, as touched on briefly here.


Industrial Output UP In August

In what amounts - at this point - to a rather trifling detail in all of this, ISTAT announced Friday morning that Italian Industrial production rose month on month in August at the fastest rate in a year - helped by a decline in oil prices and a weaker euro that buoyed exports. Output gained 1.4 percent from the previous month, from a revised decline of 0.5 percent in July, the national statistics office in Rome said today. However, if we look at the situation on a year on year basis (and corrected for working day effects), then output was down 5.3% over August 2007. 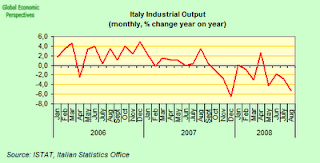 The month on month uptick trend seems to follow a European pattern, since the Italian advance mirrored a similar one in Germany - German production also rose in August, advancing the most in 15 years, while French output fell a less-than-expected 0.4 percent in the month from a revised 1.4 percent increase in July.

If we look at the seasonally adjusted monthly index however, we will see that despite the bounce-back, the level of output is still below that acheived in April, and indeed there were only two months between January 2006 and April 2007 when output was lower.

Even before the outbreak of the latest round of financial turmoil Italy's economy was in all probability in recession after contracting 0.3 percent in the second quarter. Confindustria expect the Italian economy to actually contract in 2008, while the Isae Institute yesterday cut its forecast for Italian growth, saying the economy would stagnate this year, putting in the worst performance since 2003. In the short term things can only deteriorate from this position as the shock from the financial sector hit the real economy.
Posted by Edward Hugh at 12:44 PM