Italy's Real Economy Trembles Under The Impact Of The Financial Tempest

The condition of Italy's economy continues to deteriorate by the month. Output is down, domestic demand is down, exports are struggling, and unemployment is up. The tumultuous events of late August and early September in the global financial markets are now evidently making their presence steadily felt on the real economy. And new factor emerged in recent days, with the global banking and financial crisis arriving right on Italys doorstep, via the delicate position of the second bank - Unicredit - who saw their shares drop around 25 percent in three hectic days last week, due to concerns about their capital gearing, and their ability to meet their liquidity commitments due to their exposure to the mortgage securities market, especially via their German subsidiary HBV and their involvement in Eastern Euope (which accounts for no less than one quarter of Unicredit business) where conditions, according to global ratings agency Firtch (who downgarded Unicredit outlook rating only last week) are now far from benign. With no effective remedy whatsoever being offered from Euope's core leaders, the worst is, most definitely, still to come. The Unicredit problem now casts a long dark and awesome shadow over Italy's future, since the Italian state - which is already in debt to the tune of over 103% of GDP, is in no position to follow the example of its Irish counterpart and guarantee bank deposits, since should the worst come to the worst, and the state have to assume responsibility for the bank debts, the net consequence would more than likely be simply a shifting of the financial meltdown from the banking sector to Italian sovereign debt.


Italy's manufacturing sector shrank at its fastest pace in at least 7 years in September as output, new orders and employment all fell at a record rate, according to the Markit Economics Purchasing Managers Index out last Wednesday. This result is hardly surprising, since September seems to have been the ultimate "mensis horribilis" for industrial output internationally, with global manufacturing activity contracting for the fourth consecutive month, and output falling to its weakest level in over seven years according to the JP Morgan Global Manufacturing PMI, which at 44.2 hit its strongest rate of contraction since November 2001, down from 48.6 in August (Please see the end of this post for some information about countries included and the JP Morgan methodology).


According to the JP Morgan report the retrenchment of the manufacturing sector mainly reflected marked deteriorations in the trends for production, new orders and employment. The declines in output and new work received were the second most severe in the survey history, while staffing levels fell at the fastest pace for over six-and-a-half years. The Global Manufacturing Output Index registered 42.7 in September, well below the 48.5 posted for August.

The sharpest decline in production was recorded for Spain, followed by the US, Japan and then the UK. Although the Eurozone Output Index sank to its second-lowest reading in the survey history, it was above the global average for the first time in four months. Within the euro area, France and Spain saw output fall at survey record rates, while in Italy and Ireland the contractions were the second and third most marked in their respective series. Germany, which until recently was the main growth engine of the Eurozone, saw production fall for the second month running and to the greatest extent for six years. Manufacturing activity in Japan fell to the lowest in over 6- years with the Nomura/JMMA Japan Purchasing Managers Index declining to a seasonally adjusted 44.3 in September from 46.9 in August.

At 40.8 in September, the Global Manufacturing New Orders Index posted a reading well below the neutral 50.0 mark. JP Morgan noted that the trends in new work received were especially weak in Spain, the UK, France and the US, with the all bar the latter seeing new orders fall at a series record pace (for the US it was the strongest drop since January 2001). The downturn of the sector led to further job losses in September, with the rate of reduction in employment the fastest since February 2002. Conditions in the Spanish, the UK and the US manufacturing labour markets were especially weak.

So basically this is where we get to learn what a global credit crunch means in terms of output and economic growth.


In fact Italy's manufacturing sector contracted in September at its sharpest rate since the immediate aftermath of the Sept. 11 attacks in the United States, according to the Markit/ADACI. The Markit Purchasing Managers Index fell to 44.4 from August's 47.1. 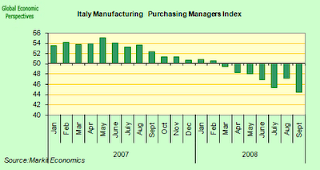 "Falling domestic and foreign demand were cited as the primary factors that
resulted in a sixth successive decline in manufacturing output during
September," Markit said in its PMI report.

The PMI data simply serve to underline the challenge facing Italy, and illustrate at least one of the reasons why the government has just revised down its 2008 growth forecast to 0.1 from a previous 0.5 . Many economists (myself included) actually fear that Italy's economy may well shrink this year. This view is also taken by the employers organisation Confindustria, who forecast a whole year contraction of 0.1%.

Manufacturing output, like the overall PMI index, hit its lowest point since October 2001 and the new orders sub-index, which had rebounded slightly in August, fell back almost to July's seven-year low.

Even before the global financial crisis intensified at the end of August, Italy's ISAE business confidence survey has been showing declining morale in Italy's business sector, with confidence also falling to its lowest level since October 2001.


Services PMI Continues To Deline, But The Rate Of Contraction Eases Slightly


Italy's service sector contracted for the tenth consecutive month in September, though the pace of contraction was slightly slower than in the previous four months. The Markit Economics Purchasing Managers' Index for services (out last Thursday), and which covers activities from hotels to insurance brokers, rose to 49.4 from August's 48.5, its highest level since April but still below the 50 mark which divides growth from contraction. 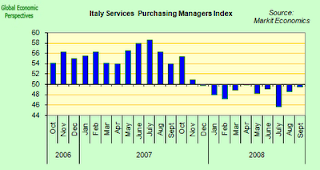 Activity and new orders fell, though at a slower rate than in recent months, while employment rose slightly for the first time since June. Business expectations fell from August's level and remained "historically low", the Markit/Adaci report said.


The Global Report on Manufacturing is compiled by Markit Economics based on the results of surveys covering over 7,500 purchasing executives in 26 countries. Together these countries account for an estimated 83% of global manufacturing output. Questions are asked about real events and are not opinion based. Data are presented in the form of diffusion indices, where an index reading above 50.0 indicates an increase in the variable since the previous month and below 50.0 a decrease.

The countries included are listed below by size of global GDP share, and the figures in brackets are the % og global GDP in each case (World Bank Data).